Nonetheless, in the final quarter of the year, exports to China returned to growth. A 7% year-on-year increase in these shipments during December was the main contributor to the return to overall expansion during the month. This was also supported by continuing strong growth in shipments to the US and Philippines, as well as Hong Kong.

The advance in exports at end of 2017 partially reflects the fact EU export growth stalled at the end of 2016, as Chinese demand began to weaken. As such, volumes are being compared with a lower base. Nonetheless, shipments were still higher in Q4 than in Q3 this year. An increase in exportable supplies likely supported shipments towards the end of the year, while falling prices boosted competitiveness. Interestingly, the EU also managed to gain some market share on the key Chinese market at the end of 2017, with the US and Canada losing out despite offering lower average unit prices. This might bode well for EU export prospects this year. However, with North American production expected to expand further this year, competition on the Asian markets will likely continue to heat up. 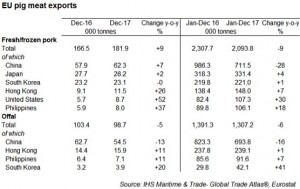 Offal exports also followed a declining trend for the year as a whole, falling 6% on 2016 to 1.3 million tonnes. Again, higher unit prices meant the decline in value terms was smaller (-3%), falling to €1.7 billion. In contrast to fresh/frozen pork, shipments did not return to growth in December. China continued to receive over half of the total export volume, but shipments were down 15% year-on-year. However, as for pork, the Philippines proved to be a strong growth market. Notably higher volumes were also shipped to South Korea last year.