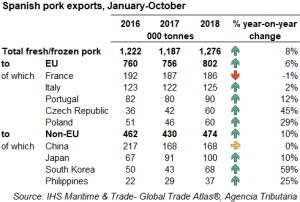 This rise in production has been reflected in fresh/frozen pork export volumes. Shipments have recorded an increase of almost 8% year-on-year in the year-to October, according to data from Agencia Tributaria.

Shipments to France reflect the trends in the past few years have very slightly eased, however a rise in exports destined for Italy has more than offset this. Shipments to China, which is the second largest market for Spanish pork, have remained steady across the year to October overall.

A sharp fall in trade during quarter one has been offset by year-on-year growth in more recent months. In general, shipments to most of Spain’s largest markets recorded strong growth across the period overall.

However, volume growth has come at the expense of value, as average prices have decreased year-on-year. In the year-to October the value of Spanish pork exports stood at €2.8 billion, 2% lower than equivalent 2017 levels.