Ms Wilkins also pointed to the coronavirus-related challenges the sow market has been facing: “Lack of demand for British carcases from the continent significantly curtailed culling levels in January and reports indicate there is now a backlog of sows to cull,” she said

“In the most recent weeks there does seem to be some movement on the sow market again. However, British prices remain at extremely low levels by historic standards.” 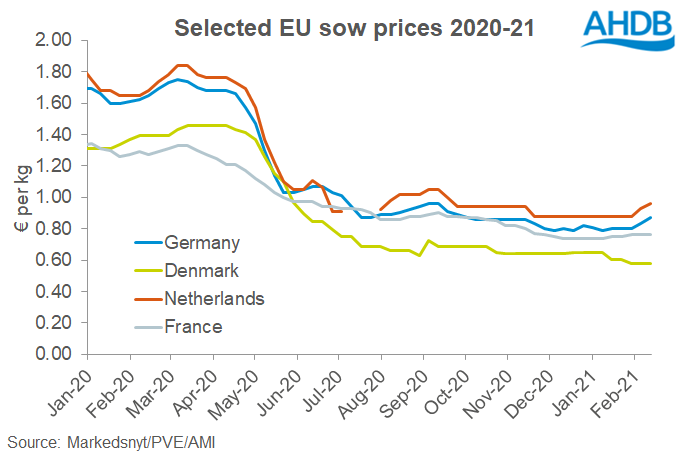 In Germany, whose sow price usually sets the tone for other member states, the average M1 sow price reached 87¢/kg in the middle of the month, the highest level since last October.

She explained: “The latest census results from Germany show a declining breeding herd and a sharp fall has also been reported in the Netherlands. Higher sow slaughter levels may also be a limitation for sow prices, though the recent slight uplift might indicate some improvement in demand.

Ms Wilkins added that sow culling also suggests there is a possible tightening of finished pig supplies ahead: “Eventually, this may enable better prices for both clean pigs and sows. Improvement in demand levels, associated with any lessening of coronavirus-related restrictions, could be another factor facilitating some price recovery in the future.”