More recently, prices in the EU and the UK strengthened due to a ‘genuine shortage of available clean pigs’, while processors and retailers have been putting money into the sector, supporting farm gate prices.

AHDB also notes that the backlog of pigs that built up over the winter appears to have diminished, anecdotal evidence implies that it has by no means gone.

This ‘extra’ availability caused by the backlog ‘may be masking, to a degree, a decline in the sow herd’. “That, and the timing of the decline, suggest that it is likely to be some time in the third quarter when supplies of market-ready clean pigs starts to fall,” AHDB states.

While noting that accurately establishing historic sow numbers, and produc-tivity per sow, is ‘hard enough at the best of times’, AHDB estimates that, based on Defra survey data, historic productivity figures, actual slaughter and an allowance for a backlog, it is likely that the UK sow herd was close to 415,000 head during 2020 and the first half of 2021.

But it adds: “Poor profitability and logistical difficulties lead to a forecast decline in the size of the UK sow herd in June 2022 to around 350,000 head as the base case for this outlook.” 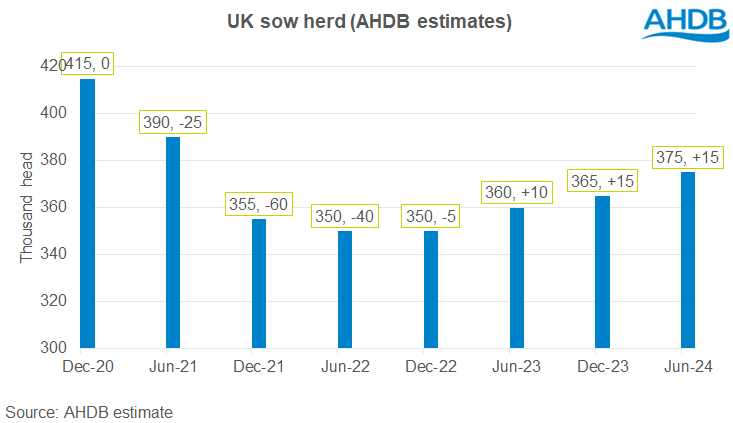 “The exact size and timing of any reduction, and any subsequent recovery, is hard to judge and will depend on the developing financial fortunes of the sector. A risk to this forecast is clearly that the situation remains depressed for longer.”

Pig meat production in the first five months of the year was 452,000 tonnes, 6% higher than at the same point in 2021. Clean pig slaughter was only 1% higher, so the rest is accounted for by heavier carcase weights – a legacy of the backlog. Weights are now falling, but they are still above last year’s levels.

Given the decline in the sow herd recorded in Defra data, and other indications of a reduction in servings, the drop in clean pig supplies will at some point outweigh any remaining backlog, AHDB noted.

As such, clean pig slaughter is expected to fall by around 15% in the second half of the year.

Carcase weights are expected to continue to fall as more typical market conditions return. It is not clear where they will settle in comparison to long term trends. This forecast assumes car-case weights of around 89kg on average over the next 18 months.

UK demand is expected to weaken slightly as the year progresses, as pre-pandemic trends re-emerge along with wider increases in the cost-of-living.

Export markets remain challenging with Chinese demand slowing. Although exports had been increasing, higher GB pig prices and declining production may constrain future volume growth. Imports are expected to grow in the second half of year as declines in demand are outweighed by declines in production.

AHDB describes the price outlook as a ‘precarious one’. A reduction in the supply of pigs by itself would typically lead to an increase in prices and, indeed, farmgate prices have increased even without a reduction in availability of UK pigs so far in 2022.

“Although some feed ingredients markets have weakened recently, compound feed prices may not retreat dramatically in the short-term, and there could be significant market volatility ahead,” the outlook warns.

“Pig prices have not yet reached the point where they cover the estimated cost of production; the continuing financial situation that pig farmers face will of course direct future clean pig supplies. Producers that can, will be keen to capitalise when net margins are positive again.”

Meanwhile, the European pig herd overall is in contraction, and the European Commission has forecast a decline in production of 3% in 2022 compared to 2021. EU production in the first quarter was 5% below Q1 2021, and this has been supportive of prices in the EU and the UK. 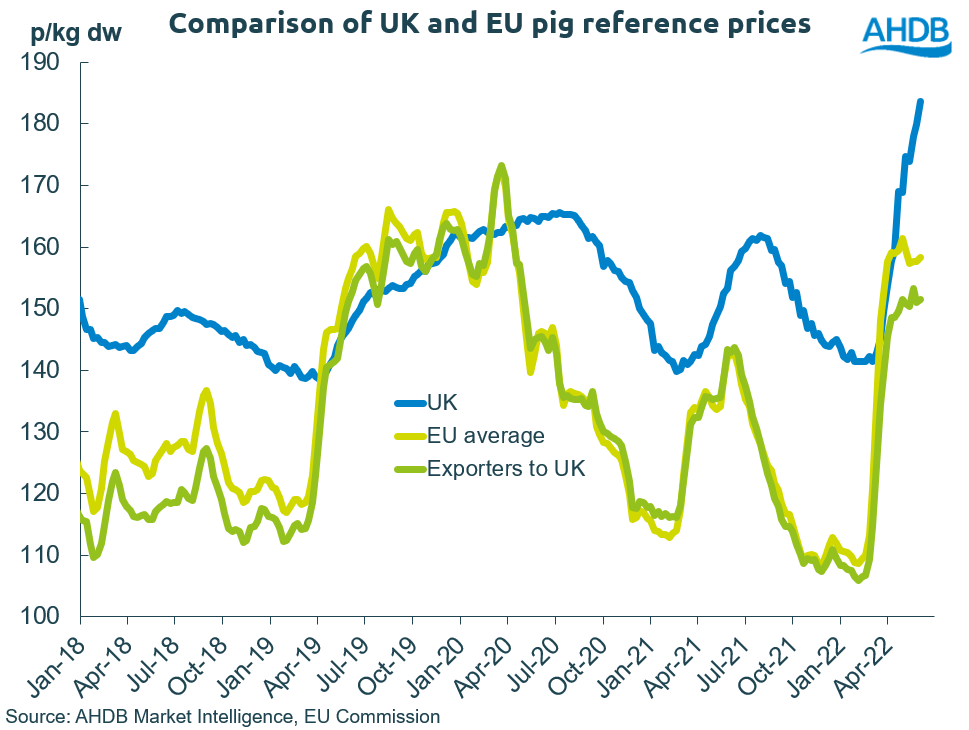