With some small exceptions in the pork results, the results were generally similar when weighted, reflecting size of business, and unweighted, one levy payer, one vote.

A total of 345 pork levy payers registered for the vote, including 15 processors/buyers. The key results for pork, which can be viewed here, included strong support for the overall priority of ‘selling every part of the pig for the best financial return at home in the UK or overseas’ and the promotional and marketing activity in the home and overseas market.

There was also good support for AHDB’s work in ‘protecting the reputation of pork and promoting its benefits to consumers’, including the We Eat Balanced campaign.

The priorities of AHDB’s work on pig health and welfare, the environment and improving profitability to remain competitive at home and overseas all scored well, although there some lower weighted scores within these categories, suggesting the big pig industry levy paying companies might have different to smaller businesses. 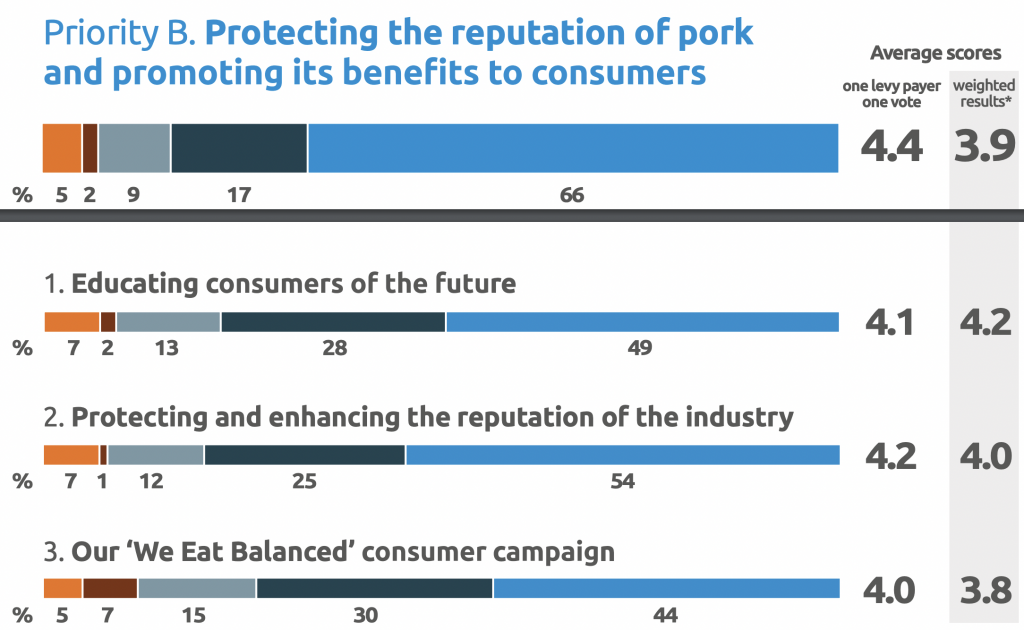 Overall, across the four sectors, AHDB said it had received ‘overwhelmingly positive feedback’ from levy payers in the Shape the Future votes.

The priorities which scored the highest include*:

With all the new and second term sector council members for each of the four sectors now ratified, receiving over 50% of votes as part of this process, councils will meet in June and again in July to consider the feedback received from levy payers and to build it into their sector plans.

AHDB’s divisional director of engagement Will Jackson said: “This is the first time we have undertaken such a campaign and to receive nearly 4,500 votes from across our four sectors shows it has been a very worthwhile exercise.

“Engagement to this degree in the industry is unprecedented. We have been encouraged by the comments and feedback received through this process which will now trigger discussions and decisions about our work.

AHDB Chief Executive Tim Rycroft added: “For the first time, thousands of levy payers have taken the opportunity to give us vital feedback about the work we should do on their behalf. This is the first step in delivering our promise to put levy payers at the heart of everything we do.”