And next year in the biggest shake-up in the scheme’s history, it intends to introduce a new ‘modular system’ to reflect organic and enhanced welfare and environmental standards beyond its core offering.

Launched in 2000 with British farming at its lowest ebb in the wake of BSE and other food scares and incomes on the floor in the face of extreme import competition, the logo was intended to serve two functions.

The first was to reassure consumers about the standards underpinning British food production, particularly with regard to food safety and traceability. The other was to clearly differentiate British food against, often cheaper, imports. It has been successful, to a point.

RTA has 46,000 direct farm members, rising to 78,000 with the devolved farm assurance bodies that use its standards. It covers approximately three-quarters of all British farm produce, with its standards stretching right across the supply chain.

Research shows 69% awareness, while 58% of those who recognise it are ‘positively influenced’ to buy products with the logo on it ‘because they are aware of some standards and think it stands for something good’, RTA CEO Jim Moseley said. But there is ‘frankly very little understanding’ about what those standards are, he added.

With this in mind, Red Tractor’s first national TV advertising campaign was launched on September 12 during an episode of popular rural soap Emmerdale.

It features a Red Tractor pulling various trailers representing different agricultural sectors. These do not include pigs, although pork products are shown at the end. The £1.5 million campaign, funded by hikes in fees to licence holders who use the logo, is aiming to increase shopper understanding of what the logo means and the lengths the scheme goes to deliver ‘traceable, safe food that is farmed with care’.

“We want to increase the value of Red Tractor by increasing understanding of Red Tractor,” Mr Moseley said, adding that consumers are twice as likely to look for the logo if they understand it represents ‘safe, traceable and responsibly produced food’.

TOUGHER INSPECTION REGIME
Red Tractor’s credibility is increasingly under threat, too. It has always faced accusations that it is a ‘baseline’ scheme standing for little more than the bare minimum legal standards – a point strongly refuted by Mr Moseley, who stressed that many standards go well beyond the law.

But of greater concern recently has been the increasing focus on Red Tractor farms, often pig units, by animal rights activists, raising very public questions about standards, compliance and the lack of unannounced inspections.

Mr Moseley said the objective was for ‘every farm to comply with every standard every day’. “While a lot of farmers are brilliant and are meeting all the standards, some farmers, as the recent exposés have demonstrated, are not. They require more support or scrutiny, so we are strengthening the regime,” he added.

From November, Red Tractor, is moving to a more risk-based approach to inspections whereby farmers who fail to comply with standards will receive additional, mainly unannounced inspections. Repeated failures will see farmers suspended and then removed from the scheme.

How the new regime will work
Most of the 60,000 farm inspections Red Tractor currently conducts annually are routine inspections, regardless of the extent of compliance with the standards.

Under the new inspection regime, ‘high risk’ members will be identified under an internal system that uses the nature and number of non-conformances to categorise each member according to ‘reputational risk’. All standards have been weighted according to risk. For example, requiring livestock to be handled in a way that avoids injury has greater weighting than having a farm map.

Where there are no non-conformances during inspections, there will be no change to the inspection regime.

Where there are a low number of failures and they are ‘low risk’, the farmer might be subject to shorter notice inspections.

But if after an inspection a member is classified as ‘higher risk’, based on the number and type of non-conformances, an additional full, unannounced spot check inspection will be triggered at the farmer’s cost.

If improvement can then be demonstrated, members will no longer be categorised as higher risk, although future inspections might be at shorter notice.

But If no improvement has been made, membership will be suspended. Even if the original non-conformances are corrected, new ones could result in suspension. To be reinstated, a suspended member must successfully correct all non-conformances.

They will be subject to a further unannounced inspection at their cost. If there is no improvement after this inspection, membership will be withdrawn, effectively ‘three-strikes and you are out’.

UNANNOUNCED INSPECTIONS
Red Tractor acknowledges the potential difficulties associated with no notice checks, given that there can be no guarantee that a farmer will be on site at the time. Farmers who require an unannounced visit will therefore be asked to provide information to reduce the chance of no-one being available, including any known de-stocking dates and biosecurity requirements.

The regime will begin in November, taking effect at members’ next annual inspection. Previous performance will not count towards the risk rating. Red Tractor expects ‘the vast majority of members’ to be unaffected by the changes.

TECHNOLOGICAL SOLUTIONS
Red Tractor also intends to make greater use of technology to improve inspections, for example antibiotic data recorded via the eMB-Pigs database and possibly the new Livestock Information Service traceability system. Mr Moseley said routinely recorded data from these systems could be utilised to make inspections shorter and reduce the burden for Red Tractor and its members.

The new Red Tractor modules, which the scheme intends to have in place by the end of 2019, will cover areas like ‘enhanced animal welfare’ and organic and environmentally sustainable production, alongside its core offering. This will be accompanied by a new consumer-facing labelling system. 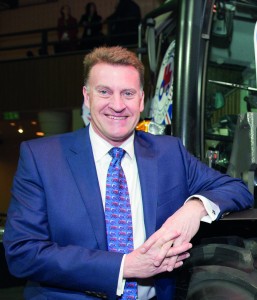 Red Tractor Assurance CEO Jim Moseley (pictured) stressed that the plans for what he described as ‘complete assurance’ were still in the very early stages. There will be a consultation with industry about how the system will work in practice, while Red Tractor is also carrying out consumer research and analysing assurance schemes in place around the world to find examples of best practice.

He said the scheme’s remit was being extended to reflect shoppers’ increasing desire ‘for more informed choice and simple signposts to traceable, safe and responsibly produced food’. “Current consumer demands are met by a variety of excellent assurance schemes. Our aim is that Red Tractor will be able to offer that consumer choice. It could become the one- stop shop for all assurance and all kinds of farm production,” Mr Moseley said.

He said the move would also provide an opportunity to create a much clearer labelling system for consumers, who currently often struggle to identify the difference between the various schemes.

It could also reduce the cost, complexity and frequency of audits for farmers, he added.

In reality, the plans also reflect RTA’s desire to secure a place as the pre-eminent assurance scheme for the UK’s post-Brexit future, to become the ‘flagship for British food and farming’.

While stressing that the vision preceded Michael Gove’s arrival at Defra, Mr Moseley said he hoped the changes would help deliver Mr Gove’s post-Brexit aims for a new ‘gold standard’ labelling scheme to showcase our ‘world-leading’ food standards at home and abroad. In its current form, Red Tractor would fall short of this.

The announcement has been generally welcomed across the food and farming sector, with NFU president Minette Batters echoing Mr Moseley’s words about the potential benefits for consumers and producers.

COLLABORATION
But there are plenty of questions, too, including how the revamped Red Tractor will sit alongside existing schemes. Mr Moseley stressed that he wanted to develop the modules ‘in collaboration’ with the various ‘excellent’ schemes that already recognise environmental, animal welfare and organic standards.

Red Tractor has already held discussions with other scheme operators, including LEAF (Linking Environment and Farming), which has shown an interest in collaborating, and the Soil Association, while it has approached RSPCA Assured.

But to what extent will fiercely independent, established schemes like the latter two – which have never been averse to promoting their own standards by criticising Red Tractor’s – be prepared to fall under Red Tractor’s umbrella?

“I envisage it’s a long project,” Mr Moseley said, stressing that the intention was to make life simpler for consumers, not to confuse them with more labels.

constructively’, along with other organic bodies, to develop the modules. But she added that consumers were ‘already confused by the number of food standards labels on pack, so it’s important that any new scheme doesn’t add to this confusion’.

RSPCA Assured CEO Clive Brazier said his scheme wanted to act as a ‘catalyst for improvements in farm animal welfare, both in the UK and globally’. “We therefore very much welcome this news and look forward to hearing more about Red Tractor’s plans,” he said.

DEFINING WELFARE
Another issue pertinent to the pig sector is exactly how ‘enhanced welfare’ will be defined – and whether the new regime could end up pitting one system of production against another in consumers’ eyes.

Mr Moseley pointed out that Red Tractor already has standards for pigs for indoor slatted, straw-based and outdoor reared and bred systems.

“The question is whether you then develop something that is much enhanced welfare under the Red Tractor label. We are right at the beginning of the project. How we get there and what it will look like is still months off,” he said.

But a Red Tractor spokesperson told Pig World that ‘at this stage’ it does not envisage the enhanced welfare module being ‘specific in terms of housing system’.

“Our view is that consumers base their purchasing decisions on a wider spectrum of attributes than purely how an animal is housed and therefore, any module we develop would reflect this,” he said.