Additionally, building costs have been rising, in particular for sows. This means that buildings have become more expensive to build, and are costing more to pay off over the loan period.

As has been well reported, straw and bedding prices also recorded a rise, but this made a smaller contribution to the overall increase in production costs. Straw prices are estimated to have raised production costs by less than 0.5p/kg, compared to Q4 2017. Meanwhile, finance costs have elevated total production costs by around 1p/kg. 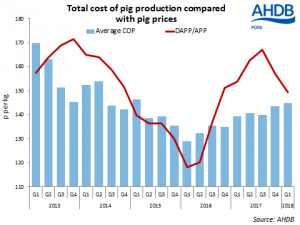 Conversely, feed costs declined slightly compared to the previous quarter. This drop has been supported by an improved feed conversion ratio, resulting in a decline in the feed required per kilogram of weight gained. As such, even though feed prices during the period actually increased on the quarter, feed costs declined as the volume of feed fed to finished pigs and sows fell. Feed costs accounted for 60% of total production costs during the quarter, one percentage point less than during the previous quarter.

Felicity Rusk, a trainee analyst at the AHDB, said: “Pig prices continued to follow a downward trajectory in Q1, and with rising costs, producer margins tightened. The EU-spec APP averaged 149.47p/kg during the quarter, around 7p less than the previous quarter. However, the first quarter is traditionally a more challenging time for pig prices.

“It is not uncommon for producers to make a loss in this quarter, with the five-year rolling average showing a loss of around 0.4p/kg. Therefore, from a long-term perspective, margins are more favourable than from a short-term view, highlighting the importance of producers assessing profitability from a long-term basis.

“Looking ahead, pig prices have showed some upward momentum in recent weeks, which may help support producer margins. However, much will depend on how the performance of the herd develops over the coming weeks, alongside input costs. With the difficult winter conditions expected to impact production over the next few months, lower productivity might have some impact on margins.”