In the UK, prices have continued to rise. In the week ending July 21, the UK price stood at 152.29p/kg, 2.63p higher than four weeks ago. Although, there was a slight decline in the latest week. Converted to euro, the price is €169.38/100kg, with a smaller four-week rise of €1.65/100kg. Throughout July, sterling has increasingly weakened, as a no-deal Brexit seems increasingly likely.

AHDB analyst Alex Cook said: “The difference between EU and UK prices has been narrowing, falling below €5 in the latest week. Although the overall EU average has now been above the UK price for 15 weeks, this situation may not last long if recent trends continue.

“Looking forward, it is possible the market will start to stabilise. The heatwave on the continent is further tightening supply levels. Market reports also suggest there is also some optimism for an improvement in Chinese import demand developing around the end of August.” 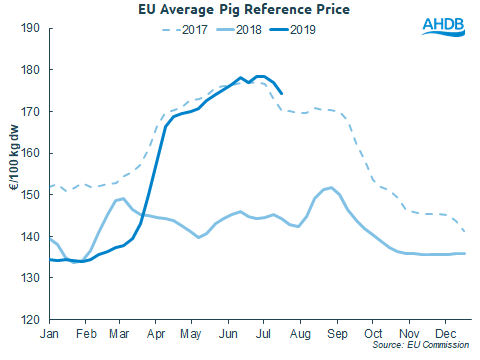 In contrast, Southern European prices have seen seasonal rises as summer brings tourist demand. The extreme temperatures have also slowed production. Whilst other nations have seen declines, Spanish prices rose by €2.27 over the last four weeks to €181.12/100kg.