Meanwhile, the outdoor herd recorded a slight decline in the number of pigs weaned per sow per year in the latest period, compared to the 2017 average, standing at 23.9 pigs. The number of pigs born alive per litter rose marginally, however, this was counteracted by a higher pre-weaning mortality rate. 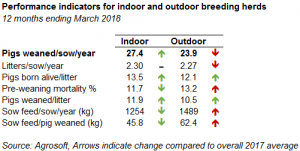 Felicity Rusk, trainee analyst at the ADHB, said: “Performance traits for the rearing and finishing herd were also generally positive for the most recent 12-month period. The feed conversion ratio (FCR) for rearing pigs decreased slightly from the 2017 average, to 1.75. This is, however, still 0.04 points above the 12-month average for this time last year. Meanwhile, the FCR for finishing pigs decreased significantly from the 2017 average, declining 0.16 points to 2.70. A lower FCR means less feed is required per kilogram of weight gained.

“On average, pigs were transferred between rearing and finishing units a day earlier and at a lighter weight in the latest period, compared to the overall 2017 average. Combined with declining average rearer pig feed consumption, the overall result was a decrease in rearer daily liveweight gain of 20g compared to the 2017 average, at 496g/day. This was despite the increase in FCR.”

Despite on average arriving at the finishing unit a day earlier, feed consumption for finishing pigs has also declined relative to the 2017 average. This reflects the more efficient feed conversion ratios being recorded, as daily liveweight gain was higher. Compared to last year, the average live weight at slaughter has also been higher, averaging 109.7kg.

With feed costs rising, the improved feed conversion ratios have been key to minimising production cost increases in recent months.