Highlighting the reality that the Government support package in October benefited processors, not farmers, she added. “These farmers, through no fault of their own, have borne the brunt of this crisis. It is high time that the Government gave them the direct support they desperately need.”

Baroness Harris criticised the Government’s decision to again delay border checks on goods moving from the EU to the UK, which she warned could potentially allow in diseases like African swine fever (ASF) due to ‘lax practices and lack of checks at borders’. She called for improved safety checks at our borders and the use of sniffer dogs at ports of entry to detect products of animal origin in England, as already deployed in Scotland.

She also challenged the Government over the labour shortages, which she said had been ‘brought about because of Brexit’, and called for a number of steps to ‘mitigate this looming disaster’, including adding butchers to the shortage occupation list and improvements to visa schemes for skilled butchers.

“The complacency with which this whole industry has been treated is breath-taking. How did we reach a point where farmers had to cull over 60,000 healthy pigs? How can farmers be expected to survive if they are losing more than £50 a pig? How many more farms must go out of business before the Government act?” she said.

You can read the full debate HERE 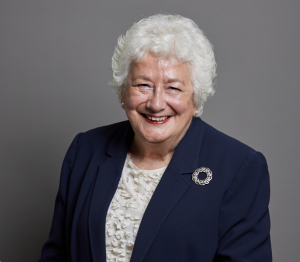 Baroness Harris also called for more action from the supply chain, particularly ‘some of our largest supermarkets’, following the recent price rises.

“The producers of pigmeat want the supermarkets to pay a fair price for homegrown pork. It is time for them to step up and help our pork industry,” she said, adding that the entire pork supply chain ‘needs investigating urgently so that we never see this situation arise again’.

Other peers from across the political spectrum issued similar pleas for support for the sector.

The Bishop of St Albans said: “Unless the financial situation improves, direct government action will be needed, whether in the form of direct temporary financial support or a roundtable for the major food retailers to ensure they support the domestic industry.”

Lord Benyon, The Defra Parliamentary Under-Secretary of State, acknowledged the various factors that have contributed to the pig industry crisis, including labour shortages, and the ‘emotional impacts on the individual farmers concerned and serious risks to animal welfare’. “I have huge sympathy for all those affected by this,” he said.

He said Government support measures had resulted in more than 740 tonnes of pigmeat entering private storage aid, and close to 30,000 pigs slaughtered under the Slaughter Incentive Payment (SIP) scheme.

He also claimed Defra has ‘worked closely with the pork industry to support it in clearing the backlog’, including roundtables hosted by Farming Minister, Victoria Prentis to discuss the challenges the sector is facing.

He said these measures, together with an increase in slaughter numbers through processors, meant that the backlog of pigs has now been ‘almost completely removed, with only small pockets of producers still experiencing backlogs’. ‘This is good news for the sector and demonstrates our commitment to it,” he said.

Defra was ‘working closely with the pig industry to identify where mitigations are available to tackle the challenges’ created by the Ukraine war and the increased input costs they are facing, he added.

He insisted the Government was addressing other issues raised, such as import checks, ASF risk and labour shortages but gave no commitment on direct support for the sector.

NPA chief executive Zoe Davies welcomed the comments made by peers. “We are delighted so many peers spoke up for us and used the information in our briefing to best effect,” she said.

But she expressed concerns over Lord Benyon’s response, particularly his claim that the backlog was almost removed and his questioning of our own figures on the number of pigs culled.

“While the backlog is coming down, some farms are still experiencing serious problems and we are concerned that Lord Beynon does not appear to be aware of this, given the weekly intelligence that we feed into Defra” she said.

“While we welcome the efforts of Victoria Prentis to bring the supply chain together to find solutions, the Government response to our crisis has not been good enough to save the industry – only the SIP scheme made any real difference to the backlog but the financial situation being experienced by all pig producers is the bigger issue by far.

“We are disappointed that once again, a Defra Minister has ducked the question of direct support for pig producers – we continue to make the case for a financial package to reflect the desperate situation and complete market collapse pig producers find themselves in.

“We have written to Victoria Prentis with evidence to prove the losses and subsequent impact on the industry and to yet again ask for their support.