“Our parent, ForFarmers BV, is very supportive of our activities in the UK pig industry and is committed to grow our business through a combination of investment in our mills and logistics fleet, enabling greater efficiencies, together with acquiring businesses that fit strategically with the group’s ‘Total Feed Business’ concept.”

Mr Cessford says ForFarmers is committed to growth, but not for the sake of it. The growth has to be consistent with the company’s core strategy.

“It’s reassuring to see that the acquisitions in UK during the past 12 to 18 months have all been focussed on deepening and broadening our business model in line with the Total Feed Business ethos,” he adds. “This is essentially all about providing nutrition in a variety of forms and engaging in supportive adjacent activities.

“The latest example of this was the acquisition of the Countrywide business, which has just been given the go-ahead by the UK’s competition authorities. The deal consolidates our existing partnership with Countrywide, as well as giving us access to the forage sector, an area we were keen to become more involved in.”

“Strategic acquisitions are important, but only if they add value and fit with our longer term business objectives. Equally, we’re always looking to develop and grow our business ‘organically’ through increases in market share.”

Of course, as the business changes and evolves, it’s vital that ForFarmers has the right team in place to manage the operation going forward. According to Mr Cessford, the company is continually looking for new people that can help in that process.

“In the past year, we’ve welcomed four new members to our UK Monogastric feed and Homemix Nutrition team, with several new appointments in the pipeline,” he says. “The pig business is constantly evolving and changing and so too must we to match the needs of an increasingly segmenting business.

“I’m delighted, therefore, that Andrew Knowles will be joining the company on July 1 as marketing director, swine. Andrew is well known in the British pig industry as a very senior figure at BPEX, and in his new role he will be responsible for organising the marketing discipline within the ForFarmers business throughout its four operating countries

“Andrew’s role is a key one in our organisation, and will involve close co-operation with marketing managers in the operating countries, together with sector communication specialists and the company’s Nutrition Innovation Centre (NIC) to drive our product strategy forward.”

Mr Knowles appointment comes as ForFarmers prepares to launch its first pan-European products, developed at the NIC. Integrating product strategies across four countries with countless market segments hasn’t been an easy process, however, huge progress has been made in the past 12 to 18 months in identifying the specific market dynamics in each country and applying a nutritional and new product development model to arrive at product ranges that are ‘fit for purpose’ and, above all, highly competitive.

“Our starting point was the young piglet, with plans now well advanced for a new ForFarmers brand of Prestarter feeds to be launched throughout the Continent and the UK in the latter part of this year,” Mr Cessford says. “The NIC has been working closely with strategic partner Nutreco, and by matching its skills and knowledge to build on what was already a very strong technical base.

“We’re confident that baby piglet products that have emerged from this new strategic partnership will bring a number of significant benefits to our customers through enhanced performance and productivity.”

Of course the work doesn’t stop there, and the NIC is working on a number of other areas that Mr Cessford feels will yield exciting developments in the short to medium term.

“Our focus for 2015 may be on piglets, but we’re also very busy on the breeder area, including gilts, and gestating and lactating sows,” he says. “Some of the nutritional regimes I’ve seen in the other countries within the group are helping to exploit the huge increases in breeding herd productivity in the past few years. We’re already bringing some of this technology and nutritional know-how to the UK market with the launch of a new transition feed used just prior to and immediately post farrowing. 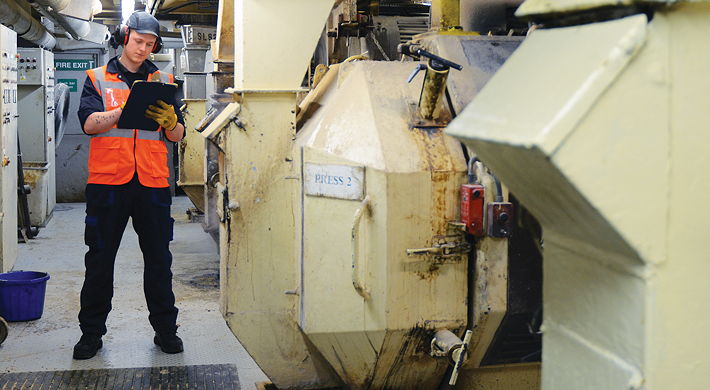 The business end of pellet production at ForFarmer’s Burston Mill

“This ‘Prelaq’ concept, and the introduction of a new top-end lactating feed, GPN Lactocare GT, is helping to transform productivity on test farms, and these new products, together with a new colostrum score system designed by the company’s pig vet, Rutger Jansen, are already creating new opportunities. It’s these and other developments in the pipeline that’ll continue the company’s proud record of nutritional innovation.”

Like all EU feed manufacturers, ForFarmers has to work under rules and regulations set by the European Commission, and naturally the company is closely watching developments that may affect the production and use of medicated feeds.

The experience in the Netherlands showed that 80% of medicated feed (prior to the in-feed ban) was being used by 20% of the farmers. These farmers were given extra attention and support at the time through advice from vets and specific recommendations regarding alternate strategies. The ban didn’t lead to problems being reported.

“When antibiotics are needed in the Netherlands and Germany, they’re administered via the drinking water – which has been shown to be fast and effective. The Dutch experience has also shown that a more targeted, specific approach via drinking water treatment can be narrowed down to a select batch of animals instead of treating the whole group.”

Mr Cessford adds that the veterinary profession has ensured that effective and prompt diagnosis of a disease is made for the animals under their care, and that any subsequent medication required is managed as effectively as possible.

“As a feed company, we always advise our customers to consult with their vet on animal health issues,” he says. “Being part of a larger international group allows us to see the benefits of both systems of drug administration, which makes us ideally placed to take part in on-going discussions with the authorities.”

This type of engagement with the industry is something ForFarmers takes extremely seriously, and another recent example is the election of the company’s corporate affairs director, Nick Major, to the NPA’s Allied Industry Group.

“As a leading supplier to the sector, ForFarmers has always strongly believed that it should support the industry in a number of ways, and one of those is by being represented on industry groups both in the UK and, for example, in Brussels,” Mr Cessford says. “There’s no shortage of potential legislation that can affect our industry, and you have to be proactive and engage with all stakeholders, including legislators and NGOs, to try and get the best outcome for the whole sector. As the voice of the British pig industry, the NPA plays a vital role in lobbying for a profitable future for the sector.”

As the ForFarmer’s businesses across Europe come to the end of their transition period and unite under one name, John Cessford says he’s confident that the combined resources of the bigger, international group will continue to fast-track new product development as well as providing the necessary investment to keep the firm’s milling infrastructure as up to date and efficient as possible.

“Efficiency is improving, productivity is improving, our mills are full and our lorry utilisation increasing,” he adds. “New people are joining our company, and the nutritional and technical resources we are able to access are outstanding. This is providing the platform and the confidence to grow our business going forward.

“Our customer services departments have always been an outstanding asset to our business and a key link to our customers. Our drivers and our front-line account managers remain our key assets and brand ambassadors. You can have all the technology in the world, but it’s the focus on our customers and giving them the very best service and advice we can provide that remains at the very heart of our business.” A memorable and well-managed event

John Cessford says ForFarmers was very impressed by the energy and commitment John and Simon Lewis and the whole Pig World team put into the National Pig Awards in 2014, its first year.

“The evening of the awards last November was a memorable occasion and as well-managed an event as you are likely to see in the agri/food sectors,” he said. “The focus on recognising best practice, innovation, production, hard work and commitment, training and a host of other criteria has to be commended and build on.

“This is one of the reasons we, as a company, quickly gave Pig World the commitment to remain as principal sponsor once again in 2015, and we wish the team well in its objective of recognising all that’s good in the British pig industry.”