NPA chief executive Zoe Davies said: “There were plenty of examples of fantastic displays of British-sourced pork products – including lots of exciting new ones – clearly labelled and well displayed. But there was some poor practice, too, and one of things we have really picked up is the use of ‘fake farm’ brands and other brands and labels that don’t tell the whole story on pork provenance.”

Tesco’s ‘fake farm’ brands, in particular, have raised the ire of farmers, with a number of people expressing unhappiness at its Woodside Farm pork range during the Pork Report. It is made from both UK and imported product, but that is not always clear in store, especially where domestic and imported products are mixed on the same shelf.  “Can’t be too many ‘Woodside Farms’ in Holland or Germany can there? So could Tesco tell us where they are please?,” one person who sent a photo in observed.

Other retailers, notably Asda, with its Farm Stores brand, and Aldi and Lidl have also stocked ‘fake farm’ brands. Even the Co-op, which has made huge strides in supporting British pork producers, was found to be guilty of ‘potentially misleading messages about the provenance of products’ in one East of England Co-op local store visited for the Pork Report. 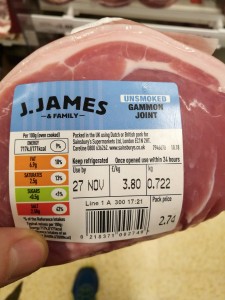 Over the past few days, Sainsbury’s has been in the spotlight for its J. James & Family range of meat and fish products, which includes both domestically-produced and imported pork products.

Zoe stressed that the range, named after Sainsbury’s founder is not a farm brand per se, but said it still has the potential to mislead the consumer to ‘believe it is British product when in fact it covers both British and imported under the same packaging with no obvious differentiation’.

“While Sainsbury’s is far from the worst, this is confusing. It needs to be clearer,” she added.

Other retailers, including Morrisons, have stated clearly that they will not use such brands. However, The Pork Report discovered a product labelled as Wiltshire Ham but produced using EU pork in one of its stores.

Zoe added: “Consumers are increasingly aware of provenance and want to buy British produce. What we have seen during The Pork Report is an increasing tendency for some retailers to rely on these sorts of brands that are misleading customers.

“So we have a NewsYear’s Resolution suggestion for our retailers – drop the fake farm brands!”

A Sainsbury’s spokesperson said the retailer was ‘surprised to be accused of creating a fake farm’, pointing out there is no mention of a farm anywhere in the branding’. “All these products are clearly labelled and the source is listed on the pack,” she said.

A Tesco spokesman said every product sold under its brands was’ clearly labelled with its country of origin and the Union Jack is prominently displayed on all British produce’. He said its ‘savvy customers’ understood not all products under the brand could come from the same farm.