The NPA is now aware of 30,000 pigs having been killed on farm due to insufficient processing capacity, creating massive problems on farms alongside a crippling financial situation, as record feed costs coincide with falling pig prices to leave pig farmers losing thousands of pounds each week.

Industry on its knees

“The UK pig industry is on its knees,” Dr Davies said. “A series of events over the last 12 months has led to a perfect storm resulting in a catastrophic loss of resource in our processing plants.”

“Since August this year, every week, processors have been unable to take the number of pigs that they had contracted farmers to grow, sometimes by up to 25%, which has led to a rapidly growing backlog of pigs on farms.

“Contingency plans ran out within several weeks and farmers had to look after their pigs for far longer than normal. Feed costs have doubled in the last year, so they have been losing around £35 per pig. On top of this, when they do eventually get the pigs to slaughter, they are overweight and out of specification and therefore heavily penalised.

“In addition, some processors have taken pigs at less than half contract prices, knowing that the farmers are desperate to get rid of them to make some space. The contracts that they have appear to be worthless and there is no penalty applied to the processor for failing to take the pigs.

“Our supply chain is clearly broken. This situation has arisen through no fault of the farmer, and has resulted in them taking the brunt of the pain. How can this be right?”

She explained how pig producers do not have the option of ‘turning off the tap immediately’ as once a sow is mated it is 9-10 months before those pigs come through the system, meaning ‘producers are put into a very vulnerable position and the balance of power is certainly not with them’.

While the Government did eventually listen to the NPA’s ‘calls of distress’ and introduce a package of measures designed to get pigs off farm as soon as possible and reduce the backlog, sadly for many, it came too late, she added.

“The processors didn’t use the measures as intended partly due to complicated visa applications and difficulties in finding trained butchers,” Dr Davies said.

Other measures such as private storage and a slaughter incentive scheme were implemented just before Christmas and so remain largely unused. Retailers said they have done all they can and yet imports still come into the country, she added.

“Farmers, now so desperate for space, have resorted to culling pigs on farms just to create a firebreak in the system. Tens of thousands of healthy pigs have been culled and sent for rendering, not into the food chain. Such wastage is immoral and has to be stopped.

“Government must reassess its package of measures to ensure that support goes to the primary producer who needs it the most.

“Retailers need to do more to stop healthy animals being killed and wasted within their own supply chains, and both need to enable the processors to shift focus onto reducing the backlog and not purely be concerned by financial viability.

“It’s time the pain was felt by all, and all actors within the supply chain take some responsibility or there will be no independent pig farmers left in this country. Already only 40% of the pork eaten in the UK is produced here – let’s not erode that any further.” 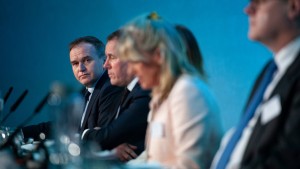 NFU president Minette Batters called on the Government to ensure that Britain maintains its self-sufficiency level. “Government has tried to paper over the cracks with short-term fixes, but if we want to avoid this crisis continuing, long-term solutions are urgently needed to ensure a resilient supply chain that enables us to continue supplying everyone at home with fantastic produce, as well as leading on the global stage,” she said.

Mr Eustice insisted that domestic food production ‘really does matter’. “It will be vital for us, as a temperate nation, to be producing our own food and drink to feed the British public,” he said.

But the Defra Secretary came under pressure from supply chain representatives for the failure of the Government to do more to address some of the issues out there, including labour shortages. He sought to push responsibility back onto the supply chain. “We did everything they asked,” he said.