Mr Parish said much of the Bill is welcome. “Absent, however, is any legal commitment to maintain our high environmental, food and animal welfare standards for imports under new trade deals,” he wrote in an article for the Conservative Home website.

But he wants to go further by enshrining these promises in law. “We have promised not to reduce our high domestic standards. So we should not undermine them through trade deals,” he added. 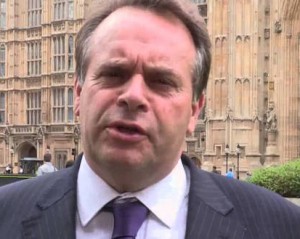 “There is no point having world-leading standards in the UK if we do not expect trade partners to reciprocate. Allowing preferential access to food imports produced to lower standards will put many of our farmers at a competitive disadvantage and out of business. “Not only will this export jobs in farming and food production, it will export the impact of this production, turning a blind eye to poor animal welfare standards abroad and encouraging environmental degradation there. We will be exporting control, not taking it back.”

He has previously tabled an amendment to the Agriculture Bill, New Clause 2, that would prevent the ratification of a trade agreement that allows the importation of agricultural or food products which have not been produced to equivalent standards.

“These issues should be front and centre,” he said, urging MPs to back his amendment, which already has the support of the EFRA Committee and a growing number of backbenchers, too.

He responded to an article by former Trade Minister Liam Fox, who previously clashed with former Defra Secretary Michael Gove on the issue of chlorinated chicken, which suggested that this sort of amendment would prevent imports under any trade agreement if UK standards on animal welfare were not applied in the country of origin.

Pointing out that a minimum of equivalence, does not mean ‘the same’, Mr Parish said this was an ‘unfortunate conflation’.

“Just as we have argued in our negotiations with the EU, there are different ways to reach the same high standards,” he wrote. “Within the framework of trade negotiations, we can put in conditionality.

He suggested the UK could ask negotiating partners that, in order to get preferential access to our market, certain rules be respected, helping us to ‘drive a harder bargain’.

“If we truly intend to keep to our manifesto promise that we will not compromise on standards, then the Government should have no issue with New Clause 2 being adopted,” he said.

Meanwhile, the NFU has convened a ‘huge coalition’ of farming, environmental and animal welfare organisations to write to all 650 MPs and urge them to ensure the new Agriculture Bill includes the necessary safeguards on food safety animal welfare standards and environmental protection.

The letter, backed by the NPA, asks MPs to speak up for British food and farming in today’s House of Commons debate.

“The Bill should ensure that agri-food imports are produced to at least equivalent environmental, animal welfare, and food safety standards as those required of producers in the UK,” it says.

“We are all agreed that a trade policy that undermines our farmers will mean a common goal of a more prosperous, sustainable and nature-friendly food and farming sector will be made much harder to achieve. And the UK will have missed an opportunity to set out its stall as being serious about tackling its global footprint.”

The letter’s signatories include:

Sue Davies – Head of Consumer Protection and Food Policy, Which?