Despite the industry flagging significant concern, the shortage of labour in 2021 took a toll on food security, the welfare of animals and the mental health of those who work in the industry, MPs concluded.

The cross-party committee of MPs make a number of key recommendations, including calls for the Government to adopt a ‘step change’ in how it engages with industry and act promptly on its concerns, and for it provide direct support to pig producers affected by the industry crisis.

There are also helpful recommendations on the shortage occupation list, the English language requirement in the Skilled Workers scheme and the timing of the Government’s fairness in the supply chain review.

However, the report stresses that a reliance on overseas labour must be reduced in preference for a long-term labour strategy that grows and develops home-grown talent, combining attractive education and vocational training packages with the deployment of new technology.

The MPs said there was no doubt that labour shortages, caused by Brexit and accentuated by the pandemic, have badly affected businesses across the food and farming sector.

“If not resolved swiftly, they threaten to shrink the sector permanently with a chain reaction of wage rises and price increases reducing competitiveness, leading to food production being exported abroad and increased imports,” the report states. 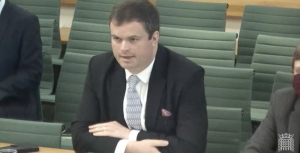 Kevin Foster was forced to correct the record after he made claims about processors in his evidence.

The Committee was frustrated by the reluctance of Government to engage with the industry over labour shortages and was critical of some of the evidence given, most notably when Immigration Minister Kevin Foster was forced to correct claims he had made about pork processors’ use the Skilled Worker scheme and about the English language requirement.

Highlighting the fact that the backlog on pig farms remains unresolved, with the sector now under even greater pressure due to the spike in feed prices, the MPs also said they were ‘particularly disappointed’ by Defra Secretary George Eustice’s attitude in suggesting the plight of pig farmers was simply the ‘materialisation of a commercial risk for which businesses should be prepared’.

“This ignores the covid-19 pandemic, for which nobody was prepared, but also the impact of the Government’s immigration policy,” the report said.

Despite ‘valiant attempts’ by the industry, Ministers failed to understand the issues and even sought to pass the blame onto the sector, according to the report, which urged the Government to have a ‘radical rethink to prevent future interventions coming too late’. 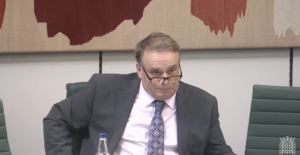 Neil Parish during one of the hearings

Neil Parish, the Chair of the EFRA Committee, said: “In 2021 farmers faced an extraordinary situation – crops were left to rot in the fields and healthy pigs were culled due to a lack of workers. This has serious implications for the well-being of the people who put food on our tables today and in the future. The Government’s attitude to the plight of food and farming workers was particularly disappointing.

“While some of the reforms put forward by Government have helped in the short term, and we agreed that we must look to expand the domestic workforce – this won’t happen overnight. In the meantime, it must use the powers available – including over immigration policy – to support the sector. Otherwise we will export our food production and import more of our food.

“Even more importantly, Government must change its attitude to the food and farming sector – trusting them and acting promptly when they raise concerns. Our food and farmers depend on it.”

A Defra spokesperson said: “We fully acknowledge that the food and farming industry is facing labour challenges and we continue to work with the sector to mitigate them.

“We have given the industry greater certainty by enabling the seasonal workers scheme until the end of 2024, allowing overseas workers to come to the UK for up to six months to work in the horticulture sector.

“Our new points-based immigration system also expanded the skilled worker route to many more occupations, including butchers, who can now be recruited from anywhere in the world.”