Kantar Worldpanel used its Consumer Mix Modelling technique to attribute the halo effect of £7.8 million on the wider fresh pork category (including added-value products) to the AHDB advertising (TV and digital) and in-store marketing activity alone, isolating this from the impact of the price promotions. When price promotions arranged to support the advertising campaign are taken into account this figure will be higher.

Other key results from Kantar Worldpanel data during the six-week campaign period compared to the same period the previous year show that volume sales of pork shoulder increased by 19.2% and value sales increased by 21.4%. Importantly, this was driven by 206,000 more UK households buying pork shoulder during the six-week campaign period than the same period last year. 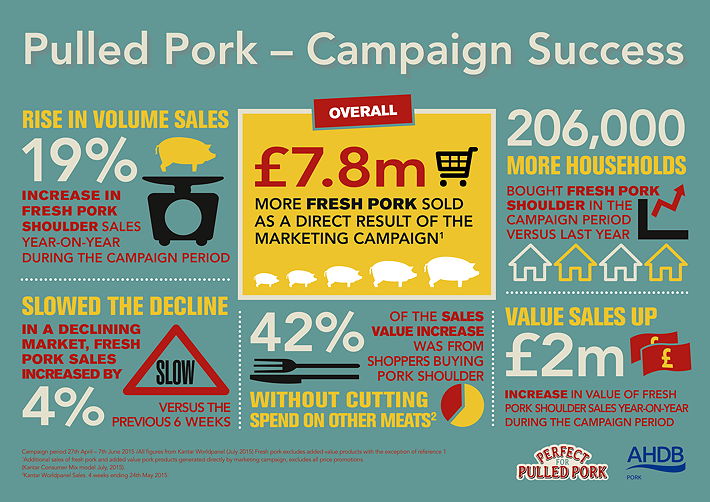 AHDB Pork’s head of marketing, Kirsty Walker, said it was clear from the results that the first phase of the campaign had driven an increase in pork shoulder sales.

“This delivers on the overall objective for this first phase of starting to rejuvenate the image of pork by getting more people to try it,” she said, “but what’s especially pleasing is the wider knock-on effect the campaign has had on overall pork sales – £7.8 million of incremental sales, according to Kantar Worldpanel.

“I would like to say a huge thank you to the pork processors and the retailers who worked in partnership with the AHDB Pork marketing team to make the idea of an integrated campaign become a reality. We couldn’t have achieved such a positive start without their commitment. As an industry, we have a big challenge to inspire younger consumers to eat more pork and shore-up the future domestic market for pork. These results are just the beginning of a long-term plan to tackle this significant issue. I hope we can continue to rely on partnership working throughout the supply chain to achieve long-term success.”

A concluding point of the Kantar Worldpanel evaluation is a ratio of sales return for levy payer money spent based on the marketing spend. Its analysis demonstrates that the first phase of the campaign generated more than £7 of additional sales across the whole category for every £1 spent on marketing activity by AHDB Pork.

“It’s great to see a campaign being evaluated in such a professional way, which clearly demonstrates value for money in this first phase,” AHDB Pork chairman Meryl Ward said. “It’s also particularly pleasing to see that a significant amount of the sales increase, 42% according to Kantar Worldpanel, came from shoppers adding pork shoulder to their baskets without cutting down on other meat purchases. I hope that retailers are particularly are happy with this result.”