The publication of the 2020-21 Watchlist follows the Government’s announcement in January that conservation of native livestock and equine breeds is a public benefit set to qualify for payment under the post-Brexit ‘public money for public goods’ agricultural policy in England.

As far as pigs are concerned, four species are in the ‘endangered’ category, that is between 100 and 200 breeding females, with Large Blacks showing a decline in breeding females of more than 5% over the past year and identified as a ‘major concern’ by RBST. The others, British Landrace, British Lop and Middle White, are all stable in numbers.

Other breeds showing a decline are Berkshire, British Saddleback Tamworth and Welsh pigs.

The full list of pigs can be seen here (- denotes more than a 5% reduction in breeding females this year). 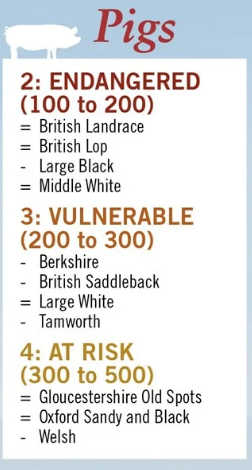 Pigs numbers are calculated from census data and figures are based on the percentage of sows producing pure-bred litters, with the exception of the British Lops.

The full list of all species can be seen here.

RBST, which works across the UK to save and safeguard rare and native livestock and equine breeds, said native breeds can bring new levels of environmental, economic and cultural benefit to agriculture and to rural communities.

RBST chief executive Christopher Price said: “Our 2020-21 Watchlist shows that the great efforts of rare breed keepers alongside our conservation programmes, over many years, are delivering real results.

“Numbers of Bagot goats have doubled in a decade and continue to grow, Vaynol cattle numbers have increased significantly this year and Border Leicesters have had their best year since they joined the Watchlist. These rare breeds, and many others that RBST monitors and supports, are in a good position to swell their numbers as interest grows in keeping native breeds.

“However, there are breeds in all our livestock and equine categories which remain at real risk of dying out. The declining numbers of Albion cattle, Large Black pigs and Hackney horses are a particular cause for concern this year.

“We have vital conservation programmes underway to save breeds most at risk, and we thank all those whose support and donations are making possible this crucial ongoing work.”

He welcomed Government’s recognition that native breed conservation is a public benefit and said this opened the way for many more farmers, smallholders and landowners to keep rare breeds. “In doing so they can be part of the important conservation effort for some of our country’s most striking and most treasured breeds, while also assuring themselves of a new, stable income stream,” he said.

There are around 30,000 herds and flocks of native breeds in the UK, contributing over £700 million to UK local economies, according to RBST