Better grass growth this season has resulted in silage stocks at a higher level than last year going into winter. This should ease demand for feed cereals, provided winter weather remains benign.

Grain prices have started to push up from harvest lows but remain facing a large domestic supply. The latest corn returns (Sept 19) show UK ex-farm feed wheat (Sept delivery) has increased £4.60/t since the start of September to £127.60/t.

The release of the USDA supply and demand estimates (WASDE) report in early September highlighted US maize production at 350.5Mt, a drop of 2.5Mt from the August release. Weather remains a key watch point for the US corn crop, particularly this season as portions of maize acreages were planted later than expected.

In July, the use of barley in animal feed fell 7% from June. This is also a 1.8% decline from July last year. This meant soya cake/meal overtook barley to become the third most used ingredient behind wheat and ‘other usage’. Imported maize remains relatively expensive compared to UK grain prices, and the usage of maize in feed fell 26% from June.

Proteins
The latest Strategie Grains report puts EU rapeseed production down at 17.0Mt, a decrease of 3.0Mt from last year. As a result, stocks could potentially be tight throughout the season. This has led Paris rapeseed futures (Nov-19) to rise €6.00/t over the month (to September 20). However, a stronger sterling has meant such rises have not filtered to domestic markets. Physical UK oilseed rape prices (delivered to Erith, November) over the month declined £6.50/t to £342.50/t up to Friday, September 20. 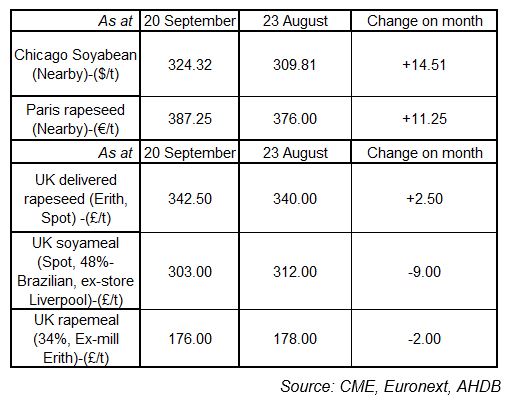 The USDA September WASDE revised soyabean production figures down further to 98.87Mt, a decline of 24.8Mt from last year. Soyabean price movements have largely been dictated by developments in the ongoing trade war between the US and China. Chicago futures (Nov-19) have risen $5.05/t through September.

Currencies
The value of sterling strengthened against the euro and the dollar during September as it recovered from the August lows. With the Brexit deadline fast approaching, developments will continue to influence currency movements. A stronger sterling has pressured UK physical prices, the fall enabled them to remain competitive in an export environment.