Imports from the EU were 13% lower at 139,200 tonnes. Germany was banned late last year due to African Swine Fever cases within its borders. Imports from Spain also recorded a sharp drop of 19% to 49,900 tonnes.

Other EU suppliers increased shipments and compensated for these declines to some extent. Denmark and Ireland are the most notable examples, with volumes totalling 45,600 tonnes (+11%) and 7,300 tonnes (+139%) respectively. 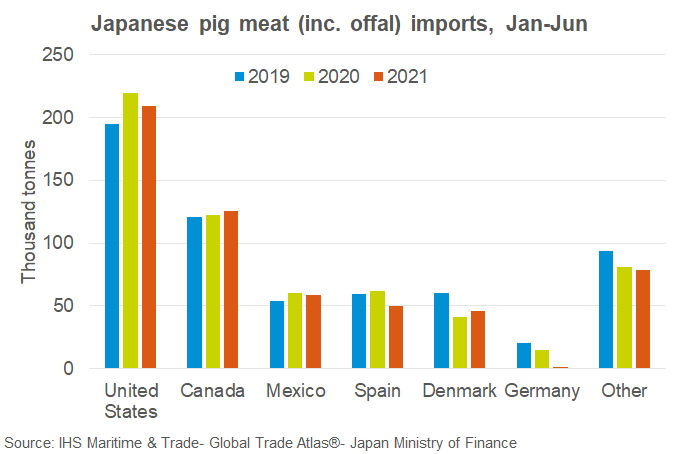 Ms Wilkins added that, despite a weak demand picture so far this year, and ongoing difficulties, the latest commentary from Rabobank suggests imports could fare somewhat better in the second half of 2021.

“This is because of low stocks of imported pork,” she explained. “The latest forecasts from the USDA, published in July, also indicate a 1% growth in import volumes is expected for 2021 overall.

“Japan’s pork import requirements, and the price they are willing to pay, will be an interesting watch-point for many exporting nations in the coming months. This is especially the case given the apparent drop-off in Chinese demand.”