She said: “This is the perfect storm of Brexit and Covid. Nobody wants to cull their animals but I already know of one farmer that’s culled 1,000 piglets this week and another who is getting out of the business after 50 years.”

The problem has, of course, been caused in part by the Home Office’s new immigration post-Brexit immigration rules that have reduced access for skilled butchers from overseas.

With farms all over the country are running out of room to rear their livestock, pig farmers are now are calling on the Government to act to increases access for butchers in order to ‘save their bacon’. 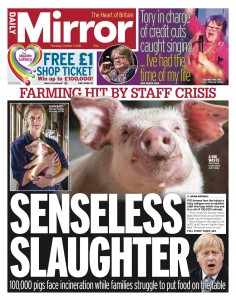 Sophie condemned Boris Johnson’s car crash interviews in which he laughed off the industry’s woes, claiming the pigs are going to die anyway.

“I heard his interviews on the subject this week and they were was upsetting, offensive, condescending and hugely frustrating. It was hard to believe what he said and it made you think did he really mean that or does he really not care?” Sophie said,

“It’s sad really that a Prime Minister could take such an attitude to British agriculture. It genuinely feels like the current Government don’t need us or want us.”

Sophie has been running her family farm in Gloucestershire since 2013, selling about 10,000 finished pigs a year and have about 4,500 pigs on the farm at any one time including sows and piglets.

She went up to Manchester to protest at the Tory party conference earlier this week and is demanding the Government listen to pig farmers like her.

“What an absolutely horrendous disrespectful, immoral, waste of an animal’s life,” she told the Mirror. “An animal being slaughtered in a human way, going into the food chain and its life having been worth something to feed people is one thing but culling a perfectly healthy animal in a country like ours where people are going hungry is just wrong.

“We are not even self-sustainable in the UK so it just seems ridiculous we are throwing away perfectly good food. I thought one of the points of Brexit was to encourage British industry and become very strong on our own but if there is no intervention now there is the possibility our pig industry might completely disappear which doesn’t make any sense to me.”