During 2019, AHDB conducted an in-depth survey to find out what pig housing was in use across England, what the future needs of the industry might be, and what support producers needed in this area. Producers’ attitudes towards investment and decision-making were also explored.

The survey included both indoor and outdoor systems, with the latter focusing on how frequently equipment is replaced.

Unsurprisingly, the survey findings showed there has been little investment over the last five years. 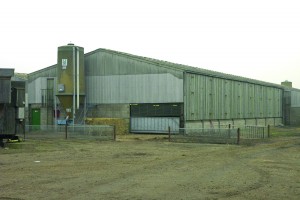 This is despite the reported ageing of pig buildings and equipment, much of which is reaching – or has already exceeded – its recommended lifespan.

Half of respondents claimed to have invested £50,000 or less over the past five years, and a quarter have invested nothing. This suggests that repairs and refurbishments are taking place on a small scale, despite more than a third of pig buildings being at least 21 years old.

Based on the feedback given through the survey, the situation is not set to improve in the near future:

When asked what the biggest barriers to investment were, the three most common answers were:

For those larger businesses, which are more likely to want to maximise financial return by exploiting technology and new ways of working, it was a lack of UK-based research sites and case studies holding them back, along with a desire for more technical information on buildings and emerging technology.

There was also a belief that there has been a lack of improvement to straw-based buildings over recent years.

For outdoor producers, the availability of suitable land was raised as a deterrent from investing in equipment.

What is AHDB’s role? 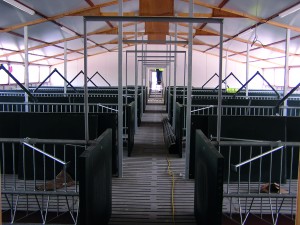 As part of the survey, producers were asked what they felt AHDB’s role was in this area. Three themes stood out: funding, communicating and engaging with producers, and providing technical information and evaluation.

While providing direct funding may not be a feasible option, AHDB will be acting on some of the findings of this survey.

Acknowledging that buildings are key to productivity, health, welfare and, ultimately, the success of the industry, AHDB has already taken steps to address some of the areas of concern, meeting with key stakeholders to discuss practical trials and research to address the lack of up-to-date information on straw-based buildings.

It is also facilitating talks between welfare policymakers and buildings suppliers to encourage conversations early on.

AHDB is also involved with GrowSave, a programme looking at energy efficiency in agriculture and horticulture. Over the next few months, it will be reviewing existing, new and emerging technologies and identifying where there are gaps or room for improvements.

This will include, for example, the use and improvement of heating systems or climate-control techniques, as well as the application of renewable energy, such as heat pumps, solar photovoltaics or anaerobic digestion.

From an outdoor perspective, AHDB has also been instrumental in bringing together pig farmers, arable farmers and landlords to improve communications and encourage a more mutually beneficial relationship, in terms of rotations and land availability, which will hopefully result in more security and investments in equipment.

You can read the full Buildings Supplement, with the March issue of Pig World!

The pig industry must have confidence in its future, backed up by support from the supply chain and Government assistance under the post-Brexit farming policy, if it is to deliver on its goals, according to the NPA. 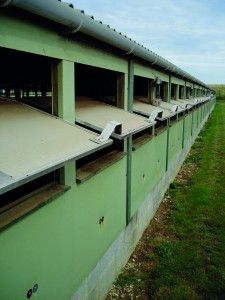 AHDB’s building survey paints a clear picture of an industry that is struggling to keep its building infrastructure up-to-date for a number of reasons, from uncertainty over Brexit, welfare requirements, environmental legislation and future labour availability to a lack of capital available grant funding.

“A lot is being mooted at the moment in terms of further improving pig health and welfare, while using fewer antibiotics, reducing our environmental footprint and improving efficiency and productivity,” said NPA chief executive Zoe Davies.

“The industry is very much up for the challenge on all fronts, but in order to deliver what is being asked of us, we need support to update our infrastructure and there has to be an understanding of this across the supply chain.

“New funding will become available under the post-Brexit agricultural policy that could provide opportunities for pig producers but we need to be confident of the future before many will commit to it.”

What funding is currently available under the CAP?

Under, the previous round of the Defra’s Countryside Productivity Scheme, pig producers could apply for grants of £3,000 and £12,000 to help them invest in new and innovative technology.

There were a number of specific options for both indoor and outdoor pig systems, including: fixed handling systems, electronic pig weighing and sorting systems, weigh bars, piglet creeps, monitoring cameras and analysers to check ammonia levels in buildings.

A further tranche of funding is expected to be made available this year.

There is also grant funding available to pig producers for slurry stores and lagoons under the current Countryside Stewardship Scheme.

What future funding would the NPA like to see made available?

While welcome, current funding remains limited against what the pig sector requires to deliver the standards being asked of it.

This will change under the post-Brexit agriculture plan for England, which will increasingly see money diverted from direct payments towards so-called ‘public goods’.

The recently-published Agriculture Bill makes provision for financial assistance that could benefit the pig sector in a number of ways, including improving the health or welfare of livestock and mitigating and adapting to climate change, alongside support to boost productivity.

Based on discussion with members, the sort of areas NPA will be seeking contributions towards include: