“Where possible, temperature lift should be restricted to around 3°C-4°C. If this can’t be achieved then ventilation capacity should be increased, either by fitting extra fans or increasing the size of existing ones.”

He also warned that temperature lift can significantly affect finishing houses, particularly where farmers have switched from continuous to batch systems.

“With continuous systems the average total weight of pigs is lower than the latter stages of batch systems when all the pigs are nearing finishing weight,” said Mr Miller. “The pigs’ heat output is considerably higher and this can cause problems in warmer weather where the ventilation systems weren’t originally designed for batch systems.”

He also noted that monitoring results had shown that finishing buildings which reach 28°C during the afternoon can drop to 18°C in the evening, adding that pigs do not like such swings in temperature.

“In warmer weather, we suggest running a slightly higher set temperature which means the temperature doesn’t drop as rapidly in the evening,” he said. “This also gives lower running costs.” 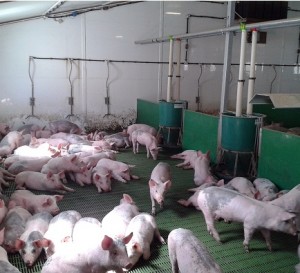 These pigs are comfortable, but temperature lift can cause problems inside piggeries if not dealt with effectively, says Tim Miller