‘This increase is slightly higher than indicated by our original GB weekly slaughter estimates during the month, though reports have indicated strong kill levels, including killing over much of the Easter bank holidays.” 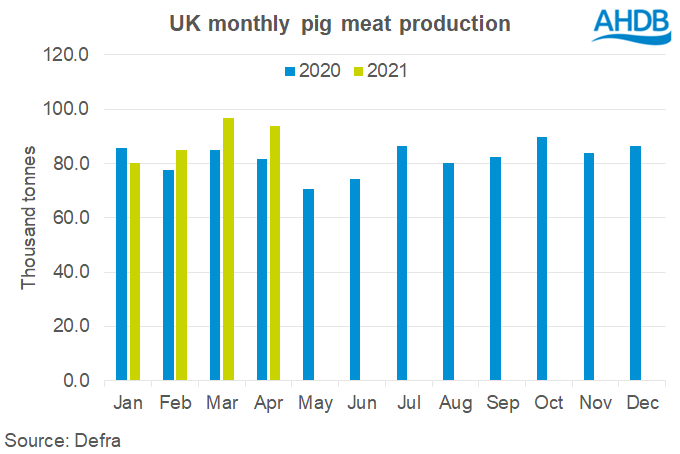 While they continue to fall, carcase weights for clean pigs remained well above last year’s level, averaging 87.7kg in April, 800g lighter than in March but 1.6kg heavier than in April 2020.

Sow slaughter also remained inflated, with 28,100 head slaughtered during the month, 25% more than the year before.

“This continues a trend seen in the previous couple of months and is at least partially due to previous delays in sow culling due to logistical challenges exporting the carcases to Europe. Considering the poor profitability of pig production recently, it is also plausible that some contraction in the breeding herd may be underway,” Ms Wilkins added.

These factors all combined to give a substantial 15% rise in pig meat production compared to April 2020, totalling 93,900 tonnes during the month.

UK pig prices continue to rise, however – the 1.31p increase during the week ending May 8 to 148.75p/kg was the 9th consecutive increase, although the SPP remains 15.55p below where it was at the same point last year.