The different regions of the UK recorded diverging trends. England and Wales recorded a decline of 5%, while Scotland’s clean pig slaughterings were four times higher than at the same time last year, when a key plant was forced to close. Northern Ireland, which had picked up some of the Scottish slaughter last year, recorded the largest decline in slaughterings, of 8% year-on-year.

Overall therefore, in the first nine months of the year the number of clean pigs killed was 3% higher than in 2017, at 7.9 million head. UK pig meat production was up 4% at 687,300 tonnes, meaning carcase weights have generally been higher so far in 2018.

However, in September alone, average carcase weights fell 1.7kg year-on-year, to 82.9kg. This reflects both poor growth rates during the summer, and unusually high carcase weights this time last year as more pigs were rolled. 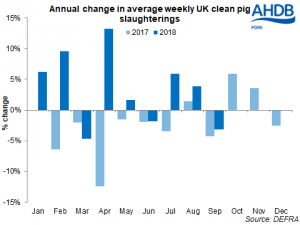 Sow and boar slaughterings in September recorded a 3% increase compared to the month in 2017, at 21,000 head. Cullings have been above year earlier levels every month this year, except in June.

While the higher slaughterings may be due to lower profitability for producers this year, it is perhaps more likely there is a higher replacement rate this year due to an older age profile in the UK breeding herd. In January-September 2017, sow slaughter declined 11% on year earlier levels; in the same period this year throughputs have increased 10% again to 195,300 head.