The announcement comes after ASF DNA was detected in a sausage seized by officials in Northern Ireland in June, as part of a 300kg seizure of illegally imported meat.

Lord Gardiner, Defra’s Minister for Biosecurity, said: “While there has never been an outbreak of African swine fever in the UK, we are not complacent and already have robust measures in place to protect against animal disease outbreaks.

“This poster campaign at UK airports and ports adds to the strict control measures we have put in place to ensure that no live pigs, wild boar or pork products from affected areas reach the UK.

“It is essential all tourists and holidaymakers do not bring to the UK any pork products to protect the UK’s high biosecurity.”

Christine Middlemiss, the UK’s Chief Veterinary Officer, said: “Keeping African swine fever out of the UK is one of my top priorities. As we have seen around the world, its impact on pig farmers and the wider pork industry has been devastating.

“The virus survives incredibly well in pork meat and can survive for months in smoked, dried and cured meats and likely years in frozen meat.

“That is why it is crucial that anyone travelling from affected regions takes this advice seriously in order to ensure that there is no spread of the disease to animals in the UK.”

The NPA has been calling on the Government to do more to keep diseases like ASF out of the country for some time.

Its chief executive, Dr Zoë Davies, said: “The NPA is delighted that Defra and UK Border Force are launching this campaign.

“We have always stressed that the biggest threat to our pig herd is from products coming in from affected countries, so this is an important step to help keep ASF from entering our country.

“The Government has estimated that a ‘reasonable worst-case scenario’ ASF outbreak could cost the country £90 million. We believe the figure would be much higher and that is why we need to mobilise every available resource and effort to help prevent such a catastrophe.”

Defra has released images of new posters targeting travellers from Asia and Europe: 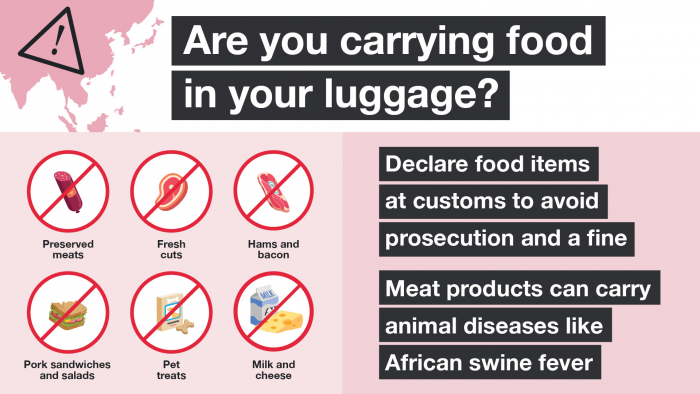 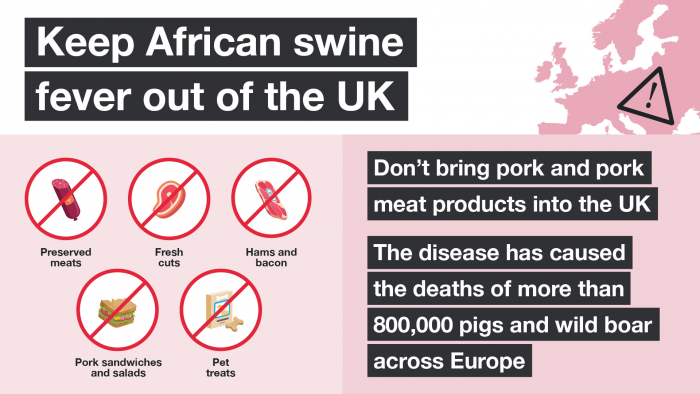 ASF, which poses no threat to human health but is fatal for pigs, has spread widely across Asia – including China and Vietnam – and parts of Central and Eastern Europe, with also been reported throughout Sub Saharan Africa.

This has led to the deaths of over 800,000 pigs and wild boar in Europe and an estimated four million pigs in Asia, causing global pork prices to rise. If the disease was found in this country, it could have a devastating impact on the UK’s commercial pig stock of five million pigs, as well as the trade of our pork products.

The main ways that the disease can spread are: