Germany narrowly increased shipments to other EU members last year (totalling 1.6 million tonnes), likely as a result of ASF being discovered in the German wild boar herd last September, restricting its export options outside of the EU.

Belgium and the Netherlands were key recipients of more German product. Last year, 61% of German exports went to other EU countries, compared to 58% a year earlier.

Ms Wilkins said that the 11% fall in pig meat imported into Germany last year (totalling 977,000 tonnes) was also key to the overall fall in product traded.

She pointed out that most countries followed the overall trend and exported less product to other member states last year: “The trend was particularly noticeable from Spain, with exports falling by 7% to 1.0 million tonnes. This reflects product being diverted out of the EU towards the Chinese market.”

Similarly, the majority of countries took lower volumes from fellow EU suppliers. Aside from Germany, Italy recorded the most significant fall in product received (-6% to 973,000 tonnes). 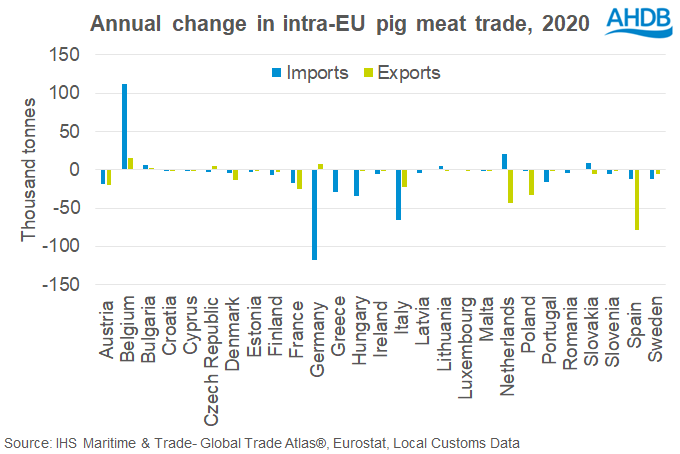