Belgium and Denmark, the two largest suppliers of pig meat to Germany, both entered “lockdown” from the middle of March, which may have caused disruption to supplies.

Social distancing measures and the closure of restaurants on 22 March cut demand and limited Germany’s ability to conduct further processing on imported product. 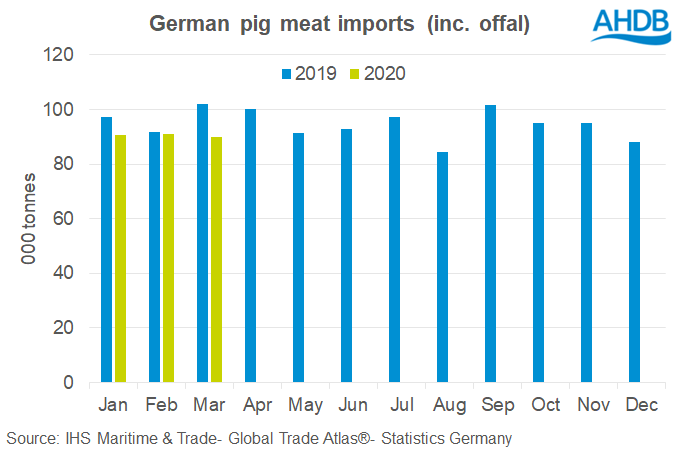 Although there were reports of disruption in supplying the Chinese market, Germany still shipped 68% more pork and pig offal there than this time last year (+73,000 tonnes). Growth predominantly occurred in January before dropping as the year progressed.

Ms Wilkins commented: “In the first quarter of this year, Germany imported only 2.2 million weaners, 15% fewer than a year earlier. Lower numbers were seen across the quarter, but especially in January, suggesting this trend is not particularly linked to the European coronavirus outbreak. Producer confidence has been reported as poor in Germany for a while, due to the risk of ASF spread and changing welfare regulations. Nonetheless, this could mean production is limited later in the year.”