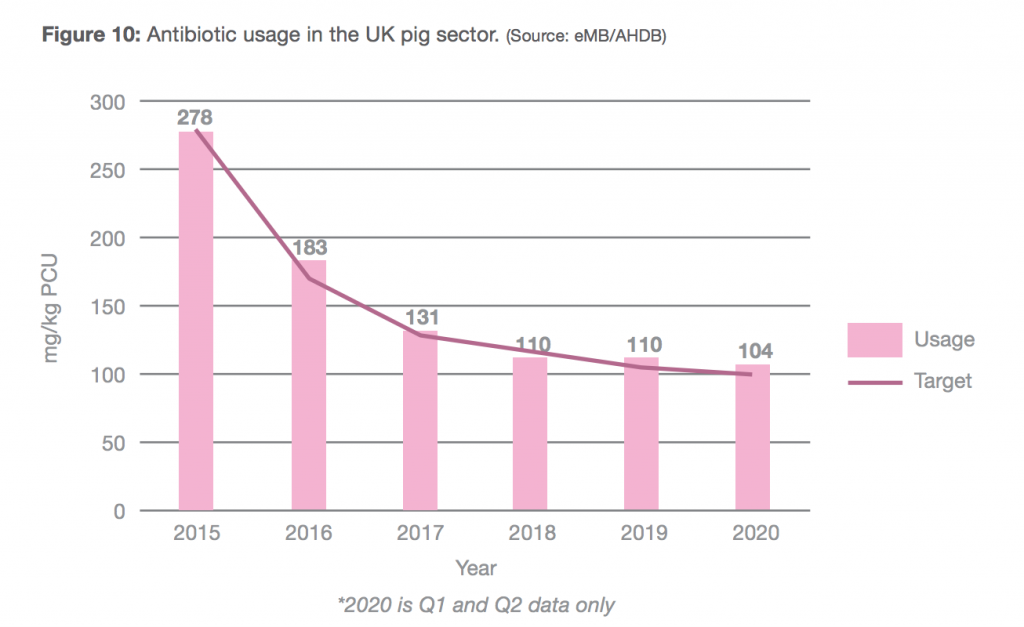 For pigs, the launch of the new targets coincides with the release of the latest usage figures indicating that the UK pig sector is close meeting its target of reducing average antibiotic usage to 99 mg/PCU in 2020 from a 2015 baseline figure of 278mg/PCU.

The data was captured on AHDB’s electronic medicine book, eMB-Pigs, which represents 95% of slaughter pigs.

Importantly, use of Highest Priority Critically Important Antibiotics (HP-CIA), deemed to be important for human use, also continues to fall. Total use of HP-CIAs in 2019 was just 0.04mg/PCU with use of Colistin down to negligible levels.

These have been set against the backdrop of new EU regulation that will, for example, ban group prophylactic use of antibiotics and impose restrictions on in-feed use, as well as the 2022 ban on use of therapeutic zinc oxide in piglet diets. The assumption has been made that this regulation will be applied in the UK.

Various actions have been identified with the aim of achieving a further 30% reduction in average overall industry usage by 2024 from a 2020 baseline, which will be defined when the figure for the whole year is available. If, for example, the 2020 figure remains at 104mg/PCU, the aim would be to reduce usage to 73mg/PCU by 2024.

There is also a desire to reduce HP-CIA use to equal to or below 2020 baselines, once these are confirmed, by 2024.

The numerical aspirations are seen as ‘indicators of success’ in delivering a number of new non-numerical targets, including identifying and supporting reductions among Persistent High Users (PHUs). PHUs will be defined as the top 5% of antibiotic users in each of the main categories of production recorded by eMB, except Boar Studs and Gilt Units.

A programme, possibly backed by funding under the Pig Health and Welfare Pathway, will be implemented to support and encourage PHUs to undertake efforts to reduce antibiotic usage as detailed in a unit specific Antibiotic Reduction Plan agreed by producer and vet.

The full 2020 Target Task Force report, setting out detailed targets across all sectors, can be viewed HERE.

There was a slight increase from 29.5 mg/kg in 2018 to 31 mg/kg in 2019, predominantly due to disease challenges from exceptionally poor weather and novel pathogens, although the VMD stressed the figure was 2019 figure was still historically low and below the 2017 figure.

The report highlights how the UK now has the fifth-lowest usage of antibiotics to treat farm animals Europe, with only Nordic countries lower.

The VARRS report also confirms generally stabilising or reducing resistance to antibiotics in the UK, which alongside reducing use of HP-CIAs, is a core objective of improved stewardship. In an EU report published earlier in 2020, the UK reported some of the best results in reducing incidence of antibiotic resistance among pathogens from farm animal and animal products.

Studies on pigs in the UK showed an overall reduction in the level of resistance in E. coli from healthy pigs at slaughter since 2015 and resistance to HP-CIAs in E. coli is at very low levels.

Commenting on the latest eMB usage figures, AHDB’s acting head of animal health & welfare Mandy Nevel said: “It is extremely encouraging to see a fall in antibiotic use during the first half of this year. The data reflect the dedication of pig producers and their vets to champion responsible antibiotic use.”

“As we edge closer to the target of 99 mg/PCU set by the UK pig industry, it is important that producers continue to work with their vets to ensure further reductions don’t compromise animal welfare. Antibiotics are a vital tool that enable vets to control disease in pigs and early treatment, where appropriate, is essential to ensure welfare.”

NPA senior policy adviser Rebecca Veale said: “The January to June figure published for 2020 demonstrates that the sustained efforts from producers, vets and wider industry have maintained impetus in terms of responsible and reduced antibiotic usage.”

Commenting on the new four-year targets for the UK livestock sector, RUMA chair Cat McLaughlin said, with over 75% of the original targets now achieved early or on track to be achieved by the December 2020 deadline, the time is right to ‘reset’ in some sectors with refreshed challenges for the next four years.

“The UK farming industry has responded extremely well to the targets. Our original aim of lowering overall antibiotic use, and in particular highest-priority critically important antibiotics (HP-CIAs), has been categorically achieved in the face of some challenging external conditions,” she said.

“Most sectors are now capturing data on antibiotic use across 90% or more of their sector which has been a key part of the success.”

Professor Peter Borriello, chief executive of the VMD, welcomed the report, which he said confirmed that the UK livestock sectors already have good progress behind them.

“The ambition now outlined in this report, alongside the proactive, holistic approaches and focus on behaviour change principles gives me every confidence that they will once again succeed,” he said.

“The UK has been hugely successful in voluntarily achieving the original targets to reduce on-farm antibiotic usage, particularly the use of critically important antibiotics, through collaborative working between vets and farmers. The next step must be to maintain this momentum in the face of the ongoing global threat posed by antimicrobial resistance.

“Alongside the fresh set of targets for 2024, a large part of this next phase will be driven by a focus on disease prevention strategies, such as improving uptake in vaccines. Better data gathering and ongoing improvements in veterinary-led health planning on farms will also help to further lower antibiotic use by reducing the incidence of endemic diseases.”