Felicity Rusk, an analyst at AHDB Pork, said: “Within this, production of breeding feed did grow on the year, with the rate of increase rising to 6% in the final quarter. More grower feed was also produced. However, this was not enough to compensate for the drop off in production of finisher feed in particular, which fell by 13% compared to the same time last year in the final quarter of 2018, and 4% (38,200 tonnes) for the year overall. 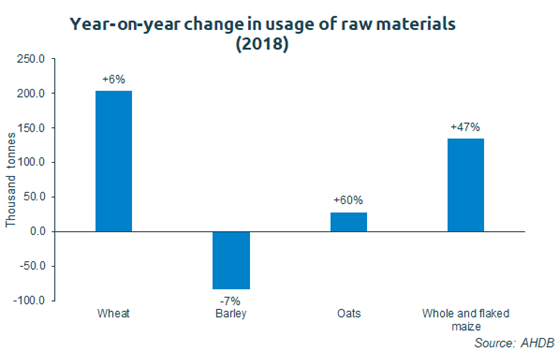 “Looking at raw material usage, maize usage in animal feed overall has continued to be significantly higher. In Q4 of 2018, 166,000 thousand tonnes of whole and flaked maize went into animal feed, over double what was used the year previously. A key reason for this rise is the price competitiveness of imported maize over domestic wheat and barley in recent months.”

Ms Rusk added: “A global tightness in supplies supported domestic barley prices, and as such the discount to wheat in the UK was minimal at the time, which may have contributed to the reduced inclusion rate.”