UK wheat futures have also been strengthening over the last fortnight, with the November-20 contract closing at £166.90 on 26 August.

Early yield estimates from AHDB’s third harvest report peg domestic wheat yields between 7.3 – 7.7 t/ha, based on 59% harvest completion. This is back on the 5-year average of 8.4t/ha

And barley prices are looking relatively bearish in the short term, the large expected production and sizeable carry from 19/20 two of the pressurising factors. 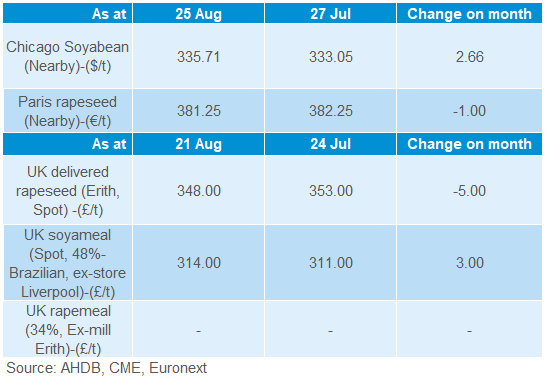 Additionally, US-China trade of soybeans has been impacting on global oilseeds markets. China has been purchasing a large volume of soybeans from the US for several weeks now, which has been helping to support global prices. Storm damage in the US across the Mid-West, and the most recent USDA crop condition report being not so optimistic about US soybean conditions has given them some price support recently.

This has lent some support to rapeseed prices. After peaking in mid-July, delivered rapeseed (Nov-20) for Erith had been softening into August. This movement was reversed last week (21 August), with prices quoted at £348 last Friday.