In contrast and as expected, the Chinese and Hong Kong markets have withered for the US this year, with shipments to these destinations combined dropping 24% (-30,800 tonnes).

Average pork export prices have averaged below last year’s levels for the year so far, leaving the total value of pork exports at $3.4 billion, up by just 3%. 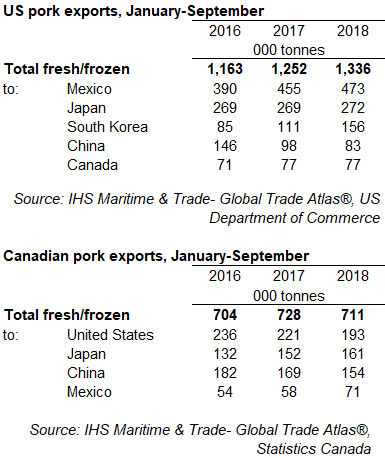 In contrast to the US, Canadian exports have declined throughout the year, though the largest decline was recorded in the first quarter. The US remained the dominant destination, though it took nearly 13% (-28,500 tonnes) less than in the same period of 2017, likely reflecting the rise in US production. Meanwhile, Mexico recorded an increase, of 22% (+12,800 tonnes), perhaps aided by the continued tariff-free access.

Volumes destined for China declined by 9% (-15,700 tonnes) though this was offset by higher shipments to a number of other Asian destinations, including Japan, the Philippines and South Korea.

As with the US, export prices were lower on average, and so the value of Canadian exports for the first three quarters of 2018 fell by 7% to just over C$2.3 billion.