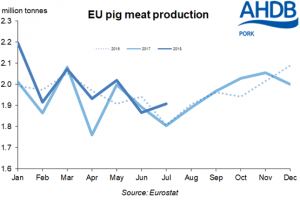 Rising Spanish pig slaughterings were the key driver behind the uptick in EU pig meat production growth in July. Throughputs were a substantial 11% (430,000 head) above year earlier levels during the month, the highest annual growth rate since April. The Netherlands also recorded a significantly higher kill (+14%, 156,000 head), as did France (+7%, 126,000 head).

However, Germany, the largest EU pork producer, recorded a 1% decline (-32.000 head). This reflects a trend recorded throughout 2018, as while the majority of EU states have slaughtered more pigs so far this, German slaughterings are down 1%.