The Dutch pig herd declined on the year (-185,000 head), which Ms Magee said could be a result of environmental regulations, which were enforced in January 2020.

In addition, the population in Germany also continued to decline, (-479,000 head) which was likely influenced by increasing legal requirements, encouraging producers to exit the industry, and with ASF now disrupting the country’s export prospects the country’s pig population is likely to fall further. 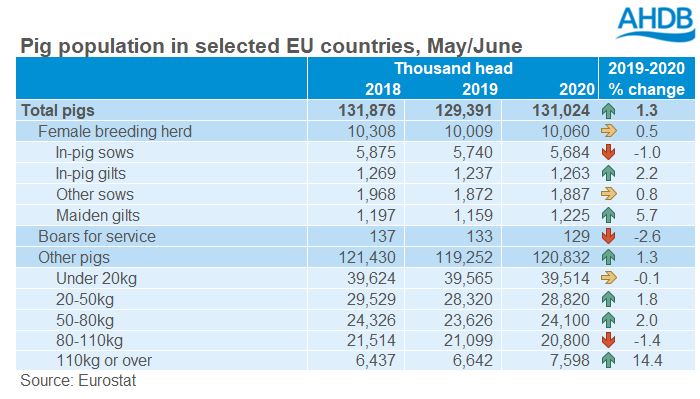 EU female breeding herd increased very slightly on the year to 10.1 million, up by 0.5% where a degree of growth came from both maiden and in-pig gilts.

Ms Magee said that although the heavier pigs recorded in this census will have been slaughtered by now, modest growth in the number of younger pigs still points towards a slight increase in pork production in the latter part of this year.

She added: “Looking further forward, modest growth in the number of gilts in the EU breeding herd suggests some nations may be looking to expand production. This is particularly the case for Spain and Denmark, both exporting nations looking to capitalise on Chinese market opportunities, particularly as German herd numbers decline.”