“The outlook remains cautious at present, and will depend on developments with the COVID-19 pandemic, the weather, and tourist trade,” Ms Wilkins noted. 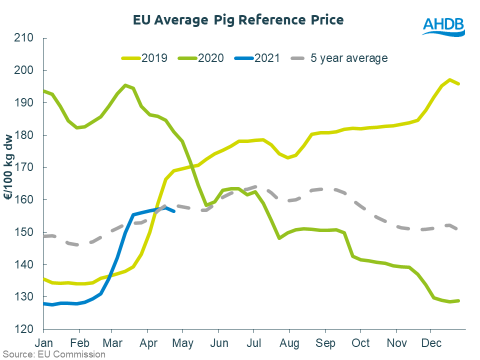 The German market price was broadly stable in early April but fell sharply in the latest week. Meanwhile, the Spanish price rose sharply at the start of the month and has since increased more slowly.

The only other key market to show a declining trend over the past month was Poland. Prices have been rising noticeably in Denmark and France.

Weakening of the pound against the euro during April meant that in sterling terms, prices still rose overall, where the EU average price was 135.55p/kg in the final week of April

Ms Wilkins added: “Nonetheless, the gap between UK and EU prices has still increased slightly, as price growth here has been stronger. In the latest week the difference stood at about 10p/kg, although this is still a relatively small difference in historic terms.”