These declines predate both the spread of coronavirus across Europe, and instances of African Swine Fever found on Polish pig farms in March and April.

In contrast, both Denmark and the Netherlands posted an increase in production of 4,300 and 13,900 tonnes respectively. 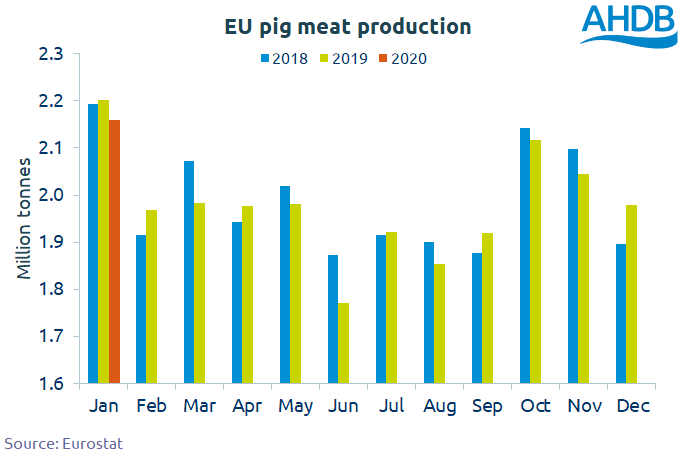 The decline in production offered some support to European pig prices, which began to recover in February, before falling again in March, Mr Wyatt added.

“Since January, supply and demand fundamentals have been volatile. Supplying the Chinese market has been more difficult, although more recently there has been a gradual reopening. Despite this, lately the market has also had to cope with a wholesale switch in demand from foodservice to retail across Europe and a rush to supply pigs amid fears of possible processing interruptions,” he said.

Recent analysis from Gira indicates that pork demand in Europe could be lower by 3.5-4.5% in 2020 before recovering somewhat in 2021, he added. Production is also expected to fall, but by less.

Mr Wyatt added: “Chinese demand will remain strong of course, which should continue to benefit the export market. However, questions remain about the logistical ability to ship the surplus pork that will probably come to the world’s market as a result of the coronavirus. Competition from US product will likely be an increasing challenge.”