Similarly, in Germany, there was a 3% decline in fresh and frozen pork purchases; although, some rise in price may have aggravated this (+1%). Meat sales were generally slow last year, according to AMI, influenced by the uncomfortably hot summer weather. However, pork did fare worse than other meats. Looking at poultry meat, higher retail prices (+3%) probably contributed to the 1% reduction in purchases. Household purchases of beef were also 2% lower, and demand for minced meat seemingly fell, given the 3% fall in volumes purchased.

“However, processed meat did record a small (+1%) increase in volume and value.

It is important to remember that the above figures relate only to household purchases, and do not cover trends out of home. Nonetheless, it seems clear that demand across the meat categories was lacklustre last year.”

The overall EU pig herd decreased to 148 million head in the year to December 2018, according to provisional figures from Eurostat. Most of this decline was due to a 4% fall in the German pig herd, alongside 7% fewer pigs in Poland. Pig numbers also fell in Denmark, but to a lesser extent. 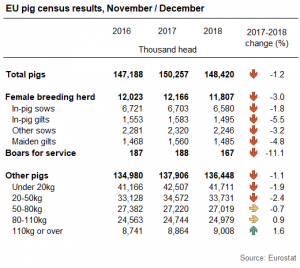 “Ongoing difficulties with African Swine Fever seem to have finally caught up with the Polish industry, which had nonetheless been expanding since 2015. The Netherlands also reported a marked decline in maiden gilts (-31,000 head), suggesting future numbers may be affected.”