In contrast, the number of ‘other sows’, including dry sows being kept for further breeding, increased from 41,000 at the end of 2020 to 51,000, suggesting that where producers are not cutting sow numbers, they are holding back on breeding in some cases. Similarly, the number of gilts not yet in pig increased by 5,000 over the year to 80,000. Boar numbers were stable at 10,000. 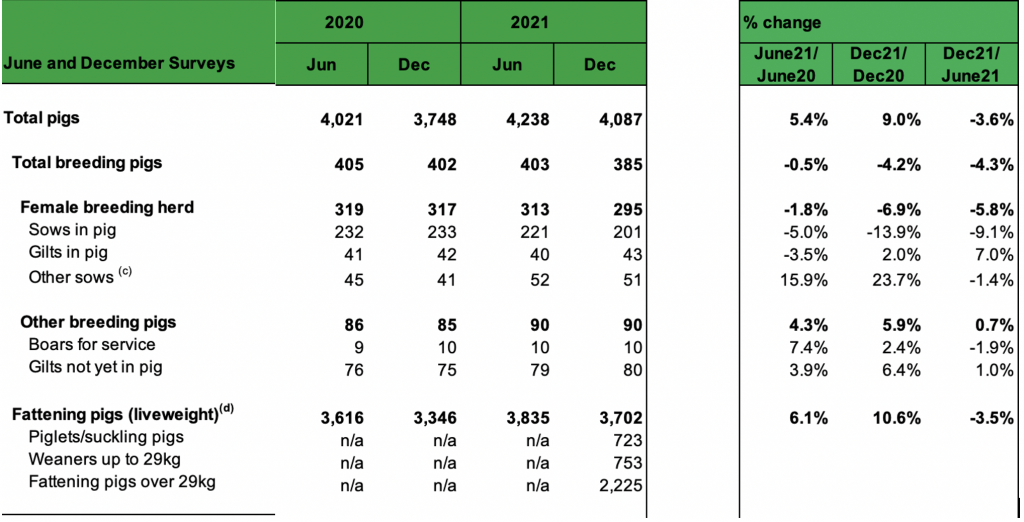 The latest figures reflect the incredibly difficult times pig producers have been enduring with the ongoing backlog of pigs on farms caused by shortages of butchers in pork plants, combined with record feed costs and falling pig prices. For the first half of 2021, producers were losing an average of £25/pig, a figure likely to have grown in the final quarter.

The NPA said it was aware of a number of produces that have left the industry or cut down on sow numbers as a result of the ongoing dire situation.

NPA chief executive Zoe Davies said: “These worrying figures highlight what we have been saying about the need for action from Government and the supply chain to prevent a serious and permanent contraction of the UK pig industry.

“We fully expect a further contraction in the first half of this year, as for many producers, the situation is simply not sustainable.

“We need focused support from Government and measures that will genuinely help to reduce the backlog – the package of measures announced in October has delivered minimal benefit so far. We also need more urgency from processors and retailers in resolving the crisis the pig sector faces and, above all fairness in the supply chain, so producers are not bearing the full brunt of all this.

“We continue to request that Defra Secretary George Eustice convenes a roundtable of producers, producers and retailers to try and thrash out solutions before it’s too late for the British pig sector.”