Mr Clarke said: “In Red Tractor, the UK farming industry has an assurance scheme that it can be really proud of.

“Major food and drink businesses use it as an intrinsic part of their sourcing policies and it is viewed positively by consumers who say it influences their shopping decisions.

“Establishing such a robust scheme which has to constantly evolve has not been without its challenges but I am leaving the organisation in great shape for the future.” 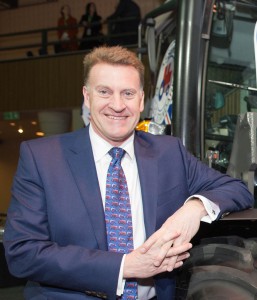 Mr Clarke will be replaced by Jim Moseley (left) – currently the assurance scheme’s chairman – later this month. He brings with him a wealth of food industry experience from a career which has spanned FMC (Meat) Ltd, Tulip, General Mills and, most recently, Mizkan.

He has also presided over both the Food & Drink Federation and the Provision Trade Federation.

Mr Moseley said he was delighted to be leading Red Tractor on the next phase of its development.

“David Clarke has done an outstanding job establishing and developing a comprehensive and robust assurance scheme which has been adopted and supported by the whole food chain,” he said.

“Looking to the future and particularly the uncertainties around Brexit, we must protect and promote British agriculture by ensuring consumers and buyers understand and value the exceptionally high standards which our farmers and growers deliver.”