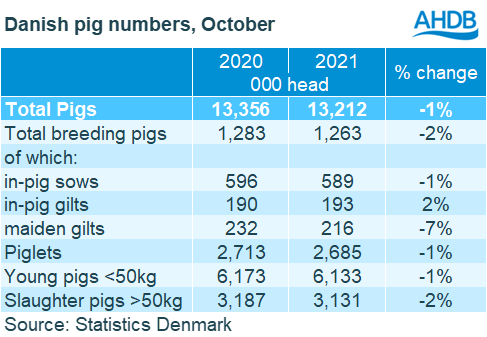 There was a decline of 2% in the breeding herd to 1.26 million head and a 7% decline in maiden gilts, which may suggest further decline in the future for the Danish pig breeding herd.

Piglet numbers were also down, decreasing by 1% to 2.69 million head. “This suggests productivity has not increased and compensated for falling sow numbers, as can often be the case,” commented Ms Wilkins.

She added: “The EU pig industry overall faces a challenging profitability situation at the moment, which might be expected to lead to further contraction in the Danish pig herd. However, the small degree of change seen so far may not have much overall impact on pig availability, particularly if productivity improvements are seen.”