“We know from what has happened in continental Europe that some of the meat from infected pigs has been made into traditional products like salami and dried sausage. It is a very tough virus – it can survive in frozen meat for a year or more.

“We heard that lot of lorry drivers who come over here like to bring their own food with them. If they discarded a sandwich or left it where it could be picked up by carrion, then that could find its way into the wild boar population or even onto farms.”

The 2000 Classical Swine Fever outbreak was thought to have been caused by an outdoor pig eating a discarded ham sandwich, while the 2001 foot-and-mouth was blamed on pigs being fed illegal waste food.

Defra and the Animal Plant and Health Agency (APHA) have teamed up with pig industry organisations in a communications campaign to stress to all pig keepers the need to follow the rules on feeding waste to pigs food to protect against ASF and other major notifiable diseases. Key messages include (see poster below): 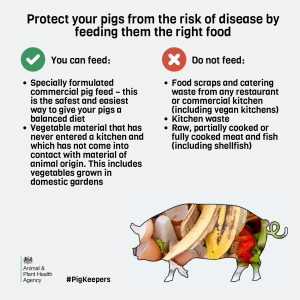 Also interviewed on Countryfile, APHA head virologist Professor Ian Brown said ASF was a ‘terrible, devastating and highly contagious disease’ that would have huge implications for pig health and welfare and the entire industry if it got into the country.  He urged all pig keepers not to feed kitchen scraps, which is illegal anyway and poses a huge risk to the pig industry.

The feature can be viewed here (26 mins). Later on in the programme (approx 46 minutes) you can also enjoy an excellent feature on Pig World columnist Chris Fogden’s large outdoor herd in Norfolk – it is well worth a view.

In mid-November, the virus was found in wild boar at two different sites around 140 km from Poland’s eastern border. This represented a further westward spread into a new area and was seen as a concern as it takes infection closer to the more pig dense area of western Poland.

There are concerns that the movement of people with contaminated clothing, boots or equipment, vehicles and personal imports of pork products could result in the introduction of the highly contagious and often devastating disease to the UK.

National Pig Association chief executive  Zoe Davies, said: “A notifiable disease outbreak would not only needlessly result in the loss of many pigs and annihilate our burgeoning export market, but would significantly impact on countless families, their staff, local businesses and tourism for months. Feeding illegal food waste, however harmless it might seem at the time, is just not worth the risk.”