“Provinces where there are active outbreaks, and those surrounding, are subject to restrictions on live transport. This is particularly problematic as during the industry’s recent modernisation programme, many pig farms were relocated to remote Northern areas. However, most abattoirs are situated in the south near more populous areas, necessitating long-distance transport to slaughter,” Ms Wilkins wrote.

The transport restrictions have split the market in two, with areas of surplus in the North while key demand areas in the South suffer supply shortages. Reports indicate pork prices have become similarly polarised, she added.

The government has recently tried to alleviate this situation by easing some conditions of the pig transport bans, including allowing finisher pigs produced at farms with high biosecurity levels in ASF infected counties to be sold to slaughterhouses processing at least 150,000 pigs per year. Sows and piglets from counties without ASF within the infected province can also now be moved. “The impact of these changes remains to be seen,” she said.

China has recently released its trade figures for the first time in over six months. Fresh/frozen pork imports have generally been picking up throughout the middle of the year, but this has been counteracted by falling offal shipments. However, pork and offal imports seem to have declined sharply in October and November, despite the well-publicised supply difficulties. 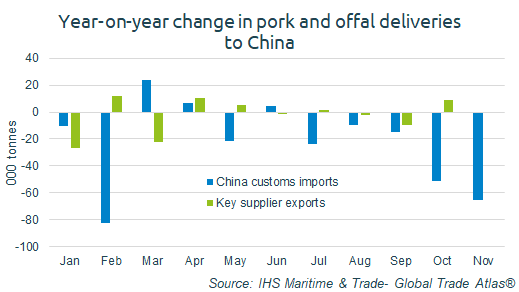 “This contrasts with data from China’s key suppliers, which actually suggests by October volumes were up on year earlier levels, even when offal is included. In light of this, there are some question marks over the reality of the situation,” Ms Wilkins said.

“It seems likely that China will be unable to contain the spread of ASF in the coming year, meaning further culling can be expected.

“Biosecurity remains a challenge for much of the industry. In light of this, expectations are that production will fall somewhat, boosting import demand for pig (as well as other meat) products.”