“Germany has previously been hopeful that it might be able to achieve a regional agreement with China, whereby unaffected areas could still trade,” she wrote.

But she suggested the implications of an export ban might not be as serious as previously feared in the previous analysis, published in February.

“In the past 18 months, the EU has been sending so much pork to China, that even if Germany did lose much of its export market, the volume that would become available for consumption within the EU would not be large by historic standards,” Ms Wilkins said. 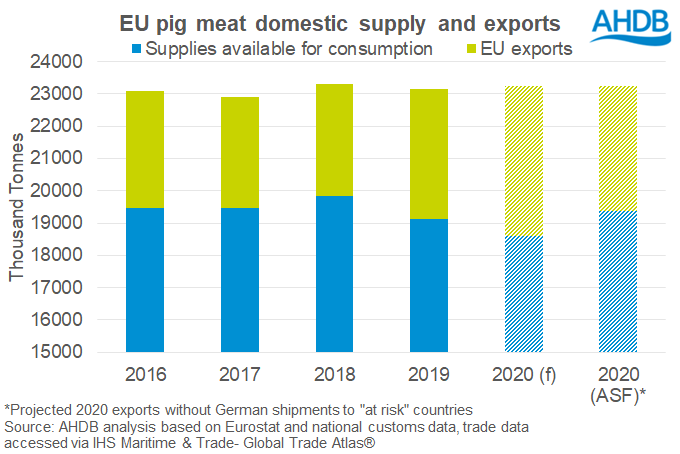 German exports to countries that tend to ban suppliers with ASF increased by 54% between January and May, to 270,000 tonnes. So if these countries, including China, impose bans on pork exports from Germany, this could result in 780,000 tonnes earmarked for export this year remaining in the EU instead.

If compensatory behaviour takes place, such as Germany exporting to other non-EU countries, or other EU exporters taking Germany’s market share of the markets it can no longer access, this would reduce the volume on the EU market, further reducing potential negative impacts, Ms Wilkins added.

“Of course this year, the situation is complicated by the COVID-19 pandemic,” she added. “While the EU has been able to consume this volume of pork in the past, it is unclear if this could be achieved in the current market conditions, which are far from normal. If the German export market is restricted, downward price pressure would always be expected to some extent, to stimulate latent European demand. Current conditions may accentuate the situation.”

Further complications may also arise from the practicalities of processing the pork for consumption in the EU.

“For now, we wait to see how China will react to this latest development,” she added. “UK producers have already seen how disruption on the German market can quickly feed through to lower cull sow prices this year. With the potential for even more significant disruption to the German market now looming, the outlook for finished pigs looks more uncertain than ever.”

NPA chief executive Zoe Davies said the situation was ‘very worrying’, following the announcement that ASF has now made its way across the Polish border into Germany. She stressed, however, that the German authorities were well prepared to cope with this eventuality, however, given the situation in Poland for some time.

“Our thoughts go out to all German producers who clearly now face a period of uncertainty. We await to see what the trade implications will be, but there is the potential for export restrictions to be put in place,” Zoe said.

“Germany is one of the biggest pork exporters in the world and producers need to be aware that this could result in downward market pressure if surplus product that can no longer be exported is re-directed onto the EU market.

“There will also be export opportunities for those countries, like the UK that can export to China, so this will hopefully lessen the blow, but the same cannot be said for the cull sow market which is already in the doldrums.”

“We hope that the German authorities are able to quickly contain the spread of the virus and keep it out of domestic pigs, so that any trading restrictions are kept to a minimum. However, it will take at least two years to regain official ASF-free status due to the testing requirements to prove ASF has been eradicated from wild boar.

“This news also highlights how ASF continues to spread in Europe and elsewhere. The biggest risk to UK pigs is if somebody brings infected meat into the country and discards in a place where domestic or feral pigs can access it.”