Bethan Wilkins, analyst at AHDB, says that while all suppliers benefited from the rise in shipments, it was to varying degrees.

“The US in particular has been gaining market share this year and shipments from Brazil also increased above the total market rate,” Ms Wilkins commented. “This does not seem to be an entirely price-driven dynamic; although US pork had one of the lowest average prices, Brazilian pork was the most expensive.”

Canadian shipments were 44% above year earlier levels, showing the first signs of real recovery after the ban on Canadian pork was lifted in November 2019. Market share reached 9%, still well below the 15% achieved in the month last year, but similar to 2018.

The official figures also show that while volumes were up 132% on the year, the EU + UK saw market share fall on the year. Some of the smaller suppliers didn’t see the same level of growth as the market overall. In particular, volumes from France were only up by 40%. Trade with the UK also recorded a comparatively small 65% increase.

“With US relations improving due to the China-US trade deal, Canada regaining access, and an increasing number of small players sending shipments, competition between suppliers is increasing,” Wilkins commented.

The price paid for imported pork also dipped from the peak earlier in the year, to 19.67CNY/kg. A similar declining pattern has been recorded in Chinese live pig prices, which have fallen from 37.51CNY/kg in mid-February to 33.30CNY/kg in the week ending 22 April. On the wholesale market, pork prices were around 45.50CNY/kg by the end of April, compared to over 50CNY/kg in February.

Ms Wilkins added:  “Of course, these are still extremely high prices, but slowing Chinese demand during the “lockdown” and some reported increase in slaughter levels have had an effect.” 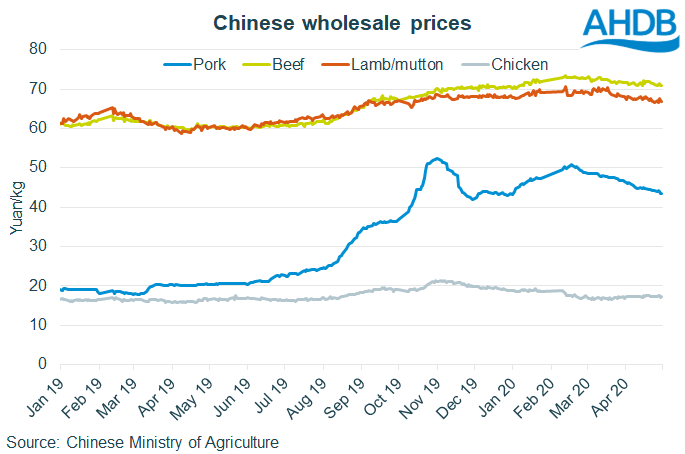 In recent weeks, all the key pork exporters have had to contend with the loss of a domestic foodservice market. In the US, prices have fallen significantly, also influenced by closures of processing plants.

Ms Wilkins added that while there are concerns this could limit supplies to  the US pork market, despite the recent order to remain open, in the short-term at least, supplies for export have remained.

She added: “Excess supply from the key exporters makes the market increasingly favourable for Chinese buyers, who are reportedly taking the opportunity to cut prices offered. Ongoing difficulties with container availability also heightens competition between suppliers.

“Of course, underlying demand on the Chinese market remains significant and will support global pork markets this year. But, supplying China amidst the coronavirus crisis will not be without challenges, at least in the short-term.

“Exactly how favourable the market will be this year depends on how the key suppliers, as well as China itself, emerge from tackling the virus. Too much economic hardship, driven by a prolonged recovery or second-waves of infection, could pull down the price at which pork can successfully trade.”