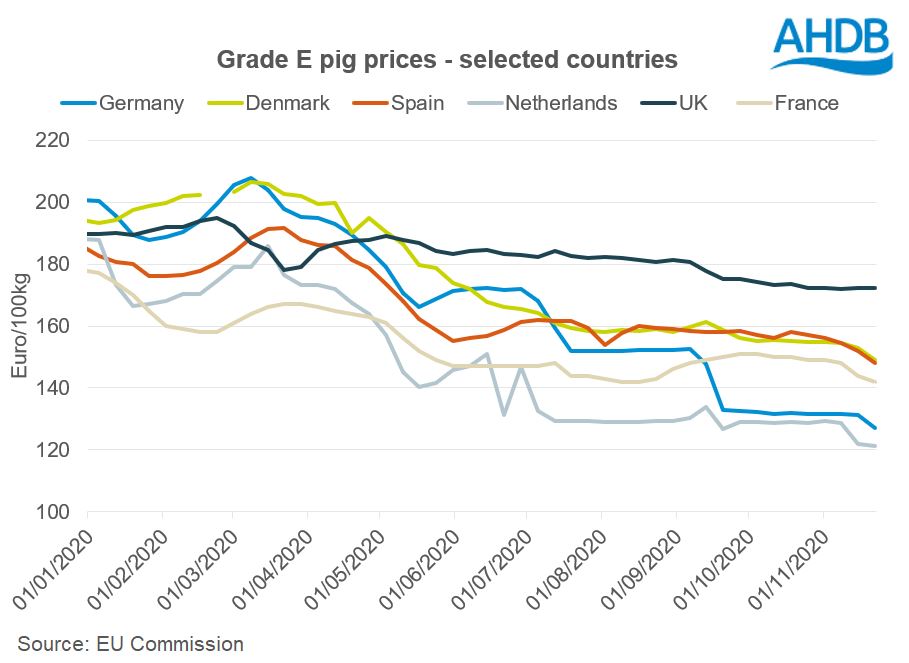 In the three weeks to 22 November, the German price fell by over €4, to average €127.06/100kg. This the lowest the measure has been in at least the last five years. As Germany dominates the EU average price, this decline has also weighed on prices in other EU countries.

In Denmark the price also fell in recent weeks, reaching its lowest price on record since March 2019. Prices in Spain and France followed a similar pattern, with the Spanish price falling by over €8, and the French market seeing continued losses due to a lack of activity in the foodservice industry.

The UK price is the exception, remaining relatively steady in the weeks to 22 November in euro terms, with UK contract prices slower to react to market conditions. “Issues at processors resulting from COVID-19 and a backlog of pigs, against a background of European oversupply, are expected to continue to impact prices in the coming weeks,” Ms Magee said.

The price drop follows news that, despite the ban from Germany’s top export destination, volumes in September recorded a significant rise, with fresh/frozen pork exports reaching 174,000 tonnes, which is the highest quantity shipped in a single month since October 2012. The majority of the pork that would have been destined for the Chinese market was re-routed onto the European market.

AHDB analyst Felicity Rusk said: “The situation that has unfolded in Germany has put downwards pressure on European markets, which has extended to GB prices.

“As such, export prices in September were generally lower than in the previous month. Prices for frozen products recorded a larger decline than prices for fresh/chilled products. While prices for frozen carcases recorded the largest decline in prices on the month, exported volumes are consistently very small (100 tonnes).

“With China’s ban still in place, Germany will have to continue to find alternative outlets for its pork exports.

“With only a few destinations outside the EU accepting a regional approach to ASF outbreaks, the European market is likely to absorb the majority of the product that would have otherwise gone to China. This will likely lead to ongoing pressure on prices unless regionalisation agreements can be made.”