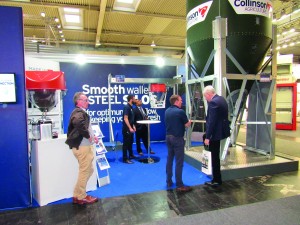 Collinson claims its straight bin sides are better than corrugated products, as feed does not bridge

Preston-based agri-construction firm Collinson was among the British exhibitors.
Having highlighted its new production range at the EuroTier preview event in Göttingen, Collinson booked a stand at the main show to exhibit its products, including a large silo, in a bid to boost export sales and source new overseas agents. In the competitive silo market, Collinson claims its straight bin sides are better than corrugated products, as feed does not bridge. 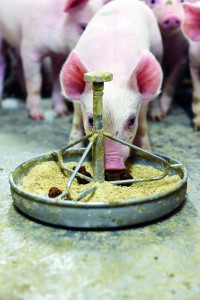 Elsewhere, Belfast-based Devenish Nutrition used the show to launch its latest innovation, Nurturaid. The product is a palatable treat-sized ball, with a milk and flavour-based coating, containing nutritional products that piglets will seek out in preference to regular creep feed.

In trials, pigs receiving Nurturaid from four to 28-days had a total feed intake (creep plus Nurturaid) of 573g. That figure almost doubled the 312g consumed by piglets in the control group.

Also on the show floor, GE Baker was so confident of the durability of its latest product, Paneltim, the stand featured a table tennis table made from the material, which is designed for use in pen division.

Meanwhile, German company Hölscher & Leuschner’s 2012 EuroTier gold medal-winning product will become commercially available in March 2017, at a price of €9,000 (£7,600), excluding VAT. The 3D handheld camera scanner is an easy, fast and accurate method of assessing a pig’s liveweight; saving time, effort and money by avoiding the curse of over- or underweight pigs at slaughter. 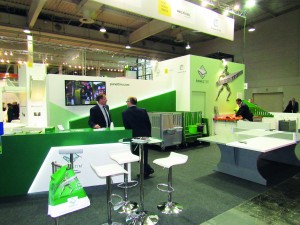 This year, Hölscher & Leuschner showcased the Porky’s Pickup XL, to ease workloads when handling dead sows and boars. The €4,490 (£3,819) self-propelled trolley is operated by one person, and can handle carcases up to 300kg.

Another German company, Meier-Brakenberg, collected a gold medal at this year’s show with its Piggy Check, which also assesses the pig’s liveweight.
This software can run on conventional smartphones, or tablets with 3D cameras, and can handle both live- and deadweights, so a killing out percentage can be calculated.
A commercial launch is due in mid-2017 and Piggy Check will be available on a monthly subscription basis.

A concrete solution
Welfare is rarely out of the news at the moment. At EuroTier, we heard from the Danes, who have been having trouble with shoulder sores on their sows, with even a type of sticking plaster has been used to treat this problem.

ACO Funki’s solution has been to produce a polymer concrete 60cm x 40cm ‘comfort plate’ that can be fitted into existing farrowing crates, under the sow’s shoulders. Newer farrowing crates, however, have cast iron panels for the sow to lie on.

The Herning-based company’s range also includes a crate-less farrowing pen, designed to minimise stress, resulting in a 50g benefit in weight gain. The sow is removed at weaning, and the piglets remain until 30kg.

To cater for this concept, ACO Funki’s combi-feeder feeds the sow initially, and then the weaners later, via an above-trough pendulum.
Toys to satisfy welfare requirements to occupy pigs were on display, too, and included the likes of chains, balls and straw racks and hoppers. 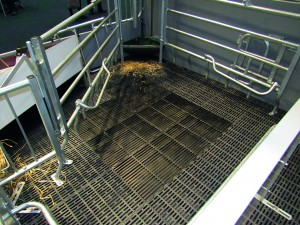 Free farrowing solutions were a common sight on the show floor

Reflecting the current trend towards free farrowing, all the major equipment manufacturers displayed large farrowing pens, featuring crates that open out three to four days post-farrowing.
Some pens have no restraints at all. How many are being sold is a different matter, and they are reminiscent of ‘new fangled farrowing pens’ seen in the UK in the 1960s.

Toxins calculators add up
Feed remains the biggest cost when producing pigmeat. Mycotoxins were scarcely known about 30 years ago, possibly aside from ergot, in rye, but today we are well aware of their affects on production and there are a host of toxin binders on the market.

Mycotoxins levels vary with the season and region so a blanket dose rate of a binder can be quite inaccurate. Consequently, French company Olmix has developed an online Myco’Calculator. Producers specify the species and give details of the mycotoxin analysis, before the programme then calculates the required amount of toxin binder MT.X+ that should be added to the feed.

Olmix is also focused on another hot topic, antimicrobial resistance (AMR), by putting a great deal of resources into using algae as an alternative to antibiotics.
Another company, which appeared to be making great strides, is Canadian breeding specialist Genesus.

International sales manager Paul Anderson said: “Recently, Danish seedstock suppliers Porc-Ex has switched from its Danish breeders to Genesus, which is naturally something Genesus is highly delighted about.

“Genesus has a boar stud in Northern Ireland and has a 30 per cent share of semen sales in both the north and the south. With reference to England, Genesus will be starting up a 650-sow nucleus of Duroc terminal sires and Yorkshire dam lines next summer.”