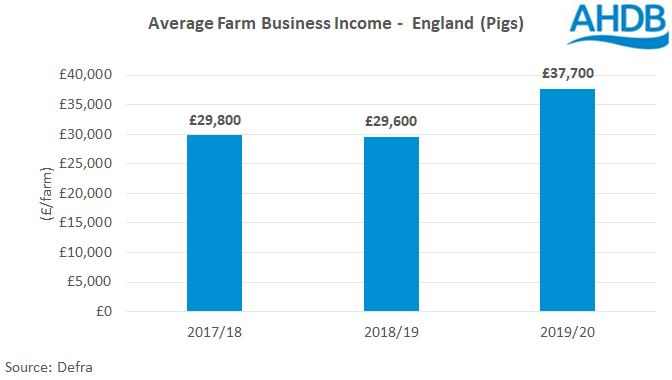 “One of the major drivers for the increase in income was reduced input costs; in particular, lower feed costs were observed during 2019/20,” AHDB livestock analyst Charlie Reeve commented. “Fixed costs on farm such as property, machinery and regular labour were also reported to be down, following on from an increase during the previous year.”

MR Reeve also attributes high farmgate pig prices during 2019/20 to driving of income for the pig industry with pig meat prices up on the previous year. Also, pig prices were well supported throughout the year by demand for protein from China following the African Swine Fever outbreak.

Defra acknowledged that the FBS sample for specialist pig enterprises is relatively small, which means it may not represent the English pig industry overall. Due to the limitations in the data, estimates for pig farm business income should be treated with some caution.

Mr Reeve added: “Looking at the wider agricultural industry, the profitability of the other sectors over the year was mixed. A heavy reliance on BPS and agri-environment payments remains across most sectors. Defra calculated that the average basic payment received by businesses totalled £27,800 across all types of farming enterprises.”