“The epidemic there had continued for about three months but now appears to be drawing to a close, with only scattered cases confirmed,” commented AHDB lead analyst Duncan Wyatt. “Stocks in the south are thought to have been reduced by 10%, although the north appears to have been worse hit, with stock reductions of perhaps a quarter.”

In January, the USDA revised its forecast for Chinese pork imports and production upwards, but the year on year fall in import demand may not be quite as high as expected, if domestic production is curtailed by continued outbreaks. 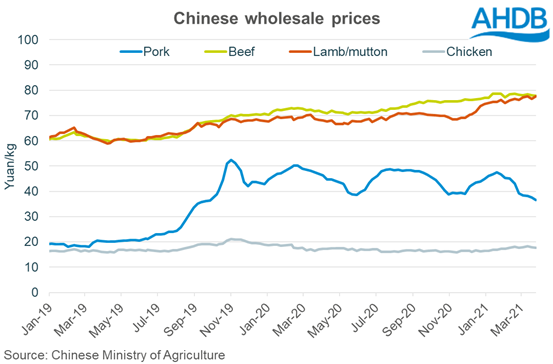 Mr Wyatt pointed out, however, that any decline in the supply of pigs has not fed through to the price of pork: The supply and demand for pork itself appears to be more stable, with recent reductions in wholesale prices.”