It has worked in the egg sector, where a requirement for eggs to carry labels like ‘free-range’ or ‘from caged hens’ has been in place for a number of years. So, campaigners ask, why not for pork and other products?

In his Command Paper outlining proposals for a post-Brexit agricultural policy for England, Mr Gove set out plans to ensure ‘our high standards are easily understood’. It said: “It is not always clear to the consumer what standards underpin welfare terminology. We are considering whether providing greater clarity of information to consumers could support higher welfare production.”

Meanwhile, a consortium of organisations drawn from across the EU is campaigning hard on the issue under the Labelling Matters banner. “Current labelling of meat and dairy products can be confusing, ambiguous and even misleading. You can change this by calling for more useful, transparent and honest labelling,” its website tells supporters.

The coalition is led by Compassion in World Farming (CIWF), the RSPCA and the Soil Association, all of which are pursuing clear agendas on the reform of farming systems, although its supporters also include the British Veterinary Association (BVA). The issue hit the headlines in March with calls for MoP labelling reported prominently in The Times.

The article claimed shoppers were being deceived by labels on meat and dairy products showing idyllic country scenes, with animals pictured outside – despite the food coming from animals that have never been outdoors. It claimed this packaging ‘conceals the reality of modern intensive farming, which confines millions of pigs, cows and chickens to indoor sheds, many in poor welfare conditions’.

Indeed, the misleading use of idyllic imagery to promote food products, in some cases linked to ‘fake farm’ brands, needs to be addressed with much clearer rules as to what is permissable, as it risks undermining the industry’s credibility with consumers.

But the Labelling Matters campaign wants to go much further.

Current pork labelling explained
Pork already carries a range of labels, including:
Red Tractor – pork produced at least to British legislative standards but over and above in several aspects.
RSPCA Assured – intended to champion high welfare, pigs must be kept outdoors or provided with enrichment, including straw.
Organic – there are a number of organic standards, which, as far as possible, allow pigs to express their natural behaviour, with Soil Association the best known.
Outdoor-bred – pigs born outside but reared indoors, often on straw, after weaning.
Outdoor-reared – pigs born outside and reared outside for about half their lives, but finished inside, often on straw.
Free-range – pigs kept outside their entire lives, with more space allowance.
* For outdoor-bred and outdoor-reared and free-range pigs, sows are kept outside for their productive life.
* Products labelled as outdoor-bred and outdoor-reared will also contain a statement about how the pigs are subsequently farmed.

So, dairy products from cows kept indoors all year would carry ‘zero grazed’ labels, CIWF’s Peter Stevenson said. The term ‘intensive indoor’ would be applied to pigs kept indoors with the legal minimum space and minimal enrichment. This standard could include the use of farrowing crates.

This is CIWF’s view. If we go down the MoP route, the industry would very much want its say on the terms.

Mr Gove appears to be supportive of the principle, although he hasn’t commented on the details. He said Defra is ‘developing a range of proposals for reform’ to deliver ‘clearer labelling about where food comes from and how food is produced’.

The calls also tie in with a greater awareness among consumers and within the supply chain about method of production, as highlighted by the Co-op’s high-profile switch to 100% outdoor-bred pork.

Confusing consumers
On the face it, the concept could be seen as a natural progression from the egg-labelling system. But scratch the surface and the problems start to appear.

For a start, as the NPA pointed out, coming up with meaningful standardised descriptions of how a pig has been reared in a single label is virtually impossible. Unlike egg production, there are numerous systems in place that a single pig can dip in and out of throughout its life – a single animal could, for example, have been born outside and raised indoors on straw and on slatted flooring at different stages.

And, unlike eggs, pigs are rarely sold whole. Indeed, cuts are often sold into lower tiers than the one the pig was produced for. How would this be labelled?

NPA chief executive Zoe Davies said the pig sector defined several different methods of production nine years ago as a voluntary scheme to help educate consumers. However, agreement on definitions for indoor-reared pork was never reached because of the plethora of indoor systems that exist.

Demonising production systems
But the bigger concern is that this sort of labelling could be used to unfairly demonise certain methods of production. The campaign is, after all, being driven by those who want to drive consumers away from what they label as ‘cruel intensive factory farming systems’.

BBC presenter and animal welfare campaigner Chris Packham has even suggested meat and dairy products from animals reared ‘intensively indoors’ should carry photographic warnings similar to those on cigarette packets. 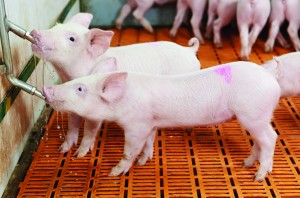 But, as agricultural PR consultant Amy Jackson wrote in her blog, we can’t simply say one system is superior to the other. “Outdoor access (for dairy cows) has the potential to contribute to good welfare, but it does not make good welfare – and in fact can mask poor welfare. While the stated aim of the campaigners is transparency for the consumer, the ambition is to create an easy proxy for welfare. And that is wrong,” she wrote.

“Let’s not suggest through words or pictures that animals go outside if they don’t. But let’s also stop using terms like ‘intensive’ and ‘factory farming’, which are just as misleading as ‘grass-fed’ or ‘farm fresh’.”

Similarly, with pigs, the use of farrowing crates and slatted indoor systems – which are being increasingly questioned in the media – does not deserve to be downgraded in the marketplace with terms like ‘indoor intensive’.

The arguments around these methods are complex, underpinned by a range of issues, including the hard economics of food production and, as far as farrowing crates are concerned, the need to protect piglet welfare.

The UK pig sector is leading the way in ‘Real Welfare’ on-farm veterinary assessment of indicators, or outcomes, of pig welfare.

The BVA has stated that mandatory MoP food labelling could offer post-Brexit UK food producers and farmers ‘a unique selling point’. But it stressed that: “A focus on welfare outcomes, not just inputs like housing, would help give a more accurate picture.”

Dr Davies also argued that production system should not be used to define welfare. If we go down the MoP route, ‘indoor bred’ would make a better indoor label, she said.

“The housing system does not define a pig’s welfare, which is the result of various factors, with stockmanship and veterinary care to the fore,” she said.

“Consumer research shows there are already too many labels out there that people don’t understand. The challenge is to explain the ones we do have – and the range of systems we deploy – more effectively.”