The rise in Spain’s production secured the country’s top spot, with pig meat production at 5.2 million tonnes, much of this underpinned by exports, with China playing an important market.

AHDB lead analyst for red meat, Duncan Wyatt, said the increase in the Spanish pig sector is a result of Spanish exporters increasing visibility at trade shows as the country tries to expand the number of markets it serves in the wake of a drop in Chinese import requirements. 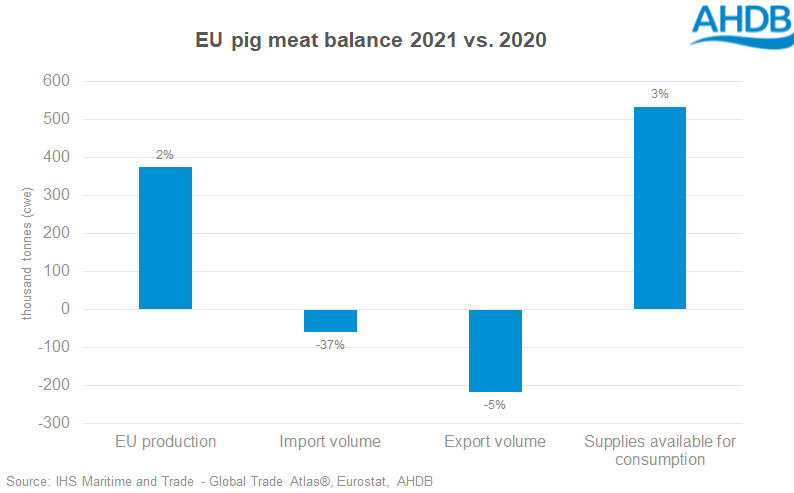 Mr Wyatt urged people to ‘be wary that the current spike in EU pig prices may be short-lived’. “While the EU pig population had declined year on year in December, the majority of the drop was in the heavier pigs, with a relatively smaller decline in the youngest piglets,” he said.

“It’s also thought that some pigs have been held back in anticipation of higher prices, further tightening current supplies by delaying slaughter. If it transpires that EU producers have held back only for a time, then the current shortage in slaughter pigs may ease soon. If reports of good pork supplies in the EU market are also true, together these factors would spell future weakness in EU pig prices.”

He added, however, that an increase in supplies available for consumption could go a long way to soaking up product that until recently had been destined for China.

“Demand in the EU would only need to return to levels seen in early 2019 to do this,” said Mr Wyatt. “The European market has consumed this product before and it can do so again, although we should be mindful of price inflation everywhere, and consumers’ willingness to pay.

“For now, reports suggest that the higher farmgate prices, and other higher costs in the supply chain that are being passed on too, are not yet deterring pig meat sales.”