The drive originates from Brussels. The European Commission is putting pressure on all member states to enforce tail docking and enrichment legislation.

The key passage in the legislation reads: “Neither tail-docking nor reduction of corner teeth must be carried out routinely, but only where there is evidence that injuries to sows’ teats or to other pigs’ ears or tails have occurred. Before carrying out these procedures, other measures shall be taken to prevent tail-biting and other vices, taking into account environment and stocking densities. For this reason, inadequate environmental conditions or management systems must be changed.” 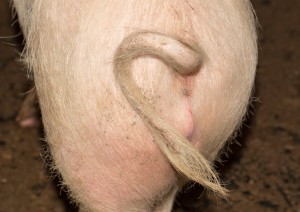 Each member state was required to submit an action plan at the start of this year. In the UK plan, Defra and APHA made a number of commitments, including increased inspection of pig farms, with inspectors ‘seeking evidence of risk assessments’ and assessing ‘environmental outcomes’ on farms. The plan also included new guidance and training of APHA assessors and better recording of tail biting and docking in abattoirs by FSA staff.

A Defra spokesperson said: “Routine tail docking is not permitted by law. Pig farmers need to demonstrate at inspections that tail docking has been used as a last resort after taking the necessary steps, as described in the current welfare code, to reduce the risks of tail biting. This includes actions to improve the pigs’ environment and their management. We want full compliance.”

More guidance around tail docking and enrichment will be included in the new Welfare Code, which has been consulted on and is expected to be published in 2019. When the code comes into force, APHA will use it to support compliance and enforcement activity. 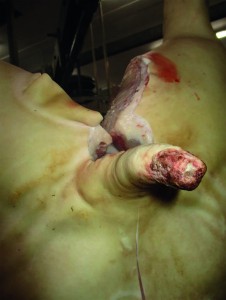 ENFORCEMENT IN ACTION
A number of producers have already fallen foul of APHA’s enhanced enforcement activity and have been hit with deductions to their Basic Payment and/or served with enforcement notices. Where pig farms are part of larger arable enterprises, the BPS penalties can be severe.

NPA chief executive Zoe Davies said the penalties were being imposed where inspectors found tails were being routinely docked, but no evidence had been provided that steps had been taken to prevent tail biting, for example by improving the pigs’ environment, even if there was no evidence of tail biting on the farm.

The NPA made tail biting and tail docking the focal point of its autumn regional meetings in October. Dr Davies said, while the pig industry is committed to making further progress in addressing tail biting, the process must be properly managed. The NPA convened a meeting between industry stakeholders, including the Pig Veterinary Society, pig producers and Defra and APHA officials to highlight concerns over the policy and try to come up with a workable process.

“We are keen to ensure that producers are not unfairly penalised. We are seeking more clarity in a number of areas and are feeding into the discussion on the new Welfare Code to ensure it provides this.

“We are also trying to get across the complexity of dealing with tailing biting outbreaks. It is a multifactorial problem and can be unpredictable. Pig producers in all systems experience tail biting to varying degrees and once an outbreak has started it can be very difficult to stop.

“Experience has shown that in some situations, there will be a need to dock tails to prevent a worse situation. At the same time, we are trying to avoid situations where farmers feel compelled to stop tail docking without veterinary supervision or taking steps to avoid tail biting – and end up creating worse problems.”

WHAT APHA INSPECTORS WILL BE LOOKING FOR
Farmers can still dock tails, but it must not be being done ‘routinely’ in the eyes of inspectors. “If you are carrying out tail docking, the important thing is that other measures should be taken to prevent tail biting and other vices. And evidence must be provided,” NPA senior policy advisor Georgina Crayford said.

The NPA has identified the key actions inspectors are looking for as evidence producers have been trying to address the problem.

STOCKING DENSITY
Overstocking will result in a breach, as always, but the European Commission has said that meeting minimum space allowance is not enough, if docking is still required. “You may be expected to trial lower stocking rates if they think this is a risk and you have no evidence to prove otherwise,” Dr Crayford said.

ENVIRONMENTAL ENRICHMENT
All pigs must have permanent access to a sufficient quantity of environmental enrichment. The current wording in Commission guidance is that this should be safe, hygienic and, ideally edible, chewable, investigable and manipulable. Combinations of enrichment are more likely to meet the requirement.

“However, as the Welfare Code is still being drafted, we are awaiting confirmation from Defra as to what will be considered as acceptable enrichment. For example, our understanding is that it doesn’t have to be edible, but we need clarification so we can advise producers what combinations of enrichment toys and materials are acceptable,” Dr Crayford said.

PIG CLEANLINESS
The law states that pigs must have ‘a clean, comfortable and adequately drained place in which they can rest’. “We understand that APHA inspectors will deem more than 20% soiling of pigs’ bodies to be unacceptable, Dr Crayford said. “This creates some obvious problems, such as how it will be measured and how outdoor units are meant to comply. We are taking this up with APHA.”

ENVIRONMENTAL MEASURES
The legislation states that: “Air circulation, dust levels, temperature, relative air humidity and gas concentrations must be kept within limits which are not harmful to animals.”

The maximum levels suggested under the draft Welfare Code include humidity levels of 40-60% (up to 70-75% for short periods) and ammonia concentration of less than 20 parts per million.

Dr Crayford said: “Again, we are challenging APHA on the detail, including the humidity, as average UK humidity is between 70% and 90% and we are expected to keep below that. We are also questioning how the ammonia will be measured, as this is notoriously difficult to measure accurately. We are currently negotiating with Defra on what goes into the final Welfare Code so producers know where they stand on this and other issues.”

EVIDENCE
Evidence of actions taken to address tail biting is essential to avoid penalty. The draft Welfare Code suggests the evidence should be provided every three months, a timescale that is being contested by NPA and PVS.

HOW TO COMPLY
The NPA has set out a checklist on how it thinks producers can remain compliant:

This is the first of a series of articles, in conjunction with AHDB and PVS, that will offer advice on all aspects of tail biting and tail docking.